Cuts in state funding for public research universities in the US has contributed to a large increase in international recruitment to these institutions, according to a new paper published by the National Bureau of Economic Research. The findings confirm reports that international tuition fee revenue helps to make up for a shortfall in public funding for US higher education institutions.

“There is a strong, consistent and negative link between appropriations changes and the enrolment of foreign students”

A 10% drop in state appropriations correlates with a 12% increase in foreign enrolments at public research universities in the US, the study found.

“In the absence of the pool of foreign students, many universities would have faced larger cuts to expenditures”

The same funding decrease tallies with an even greater growth in international enrolments of 17% at the most resource-intensive universities.

As a result, public university budgets have shifted “markedly” in the last three decades, the report observes. Beginning in the 1990s, the shift towards an increasing reliance on tuition revenues has accelerated since the onset of the 2008 recession.

Universities have opted to inflate their tuition fee revenue both by raising the level of fees charged and by increasing intake among out-of-state students – who pay more than in-state students – in order to avoid being forced to cut expenditure.

Between 2008/09 and 2015/16, inflation-adjusted tuition fees increased by nearly a third at public four-year institutions, compared with a fifth at their private counterparts.

Foreign students represent a “substantially larger” pool of students who have the means to pay non-resident tuition levels than their out-of-state domestic classmates, it explains.

It singles out China, the US’s largest student source market, as a country where few undergraduates would have been able to afford a US education until the 1990s.

The report’s authors calculated that the proportion of Chinese families with incomes greater than the average charged for out-of-state tuition and room and board by US public universities boomed from less than 0.005% in 2000 to 0.032% in 2009 and more than 2% in 2013.

This change “closely tracks” the fraction of Chinese students studying in the US over this period, the study notes.

Partly due to these demographic changes in source markets, international student enrolment figures have climbed rapidly in recent years, up 7% over the last year to surpass one million for the first time in 2015.

“In the absence of the pool of foreign students, many universities would have faced larger cuts to expenditures and potentially greater increases in in-state tuition charges,” the report asserts.

Unsurprisingly, the correlation is not consistent across the board. In particular, universities that are able to attract a larger number of domestic out-of-state students have seen a proportionately lower increase in foreign students.

The University of Michigan, where domestic out-of-state students account for around 30% of freshmen, did not significantly increase its foreign enrolment over the five year period to 2012/13, while Michigan State, where only 10% of students are from other US states, did.

Nevertheless, the study concludes that overall, “There is a strong, consistent and negative link between appropriations changes and the enrolment of foreign students at public research universities.”

In contrast, it notes that there is “essentially no link” between changes in state funding and foreign student enrolment at non-research higher education institutions.

This is because non-research universities tend to be more locally focused and have limited capacity to attract foreign students, it states. 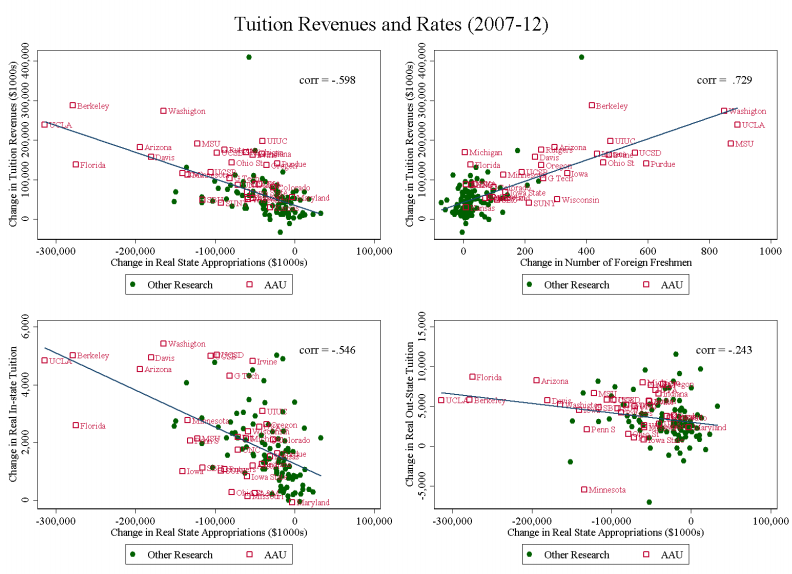