Posted on Oct 9, 2017 by Amy Baker
Posted in News, under Asia Europe.
Tagged with Turkey, US Embassy Turkey, USA.
Bookmark the permalink.

The US has indefinitely suspended the processing of non-immigrant visas in Turkey since Sunday, with Turkey following suit early on Monday after diplomatic tensions that are thought to have been provoked by the arrest of a US consulate member of staff last week.

"Students are worried, but we are not panicking, we have told them we will find a way"

The current stalemate situation will impact the travel plans of many prospective international students, for whom the US is a popular destination.

US consular employee Metin Topuz is accused of espionage and “attempting to overthrow the Turkish government and constitution”, according to press reports.

On the US Embassy in Turkey’s Twitter page, a statement was released that read, “Recent events have forced the United States government to reassess the commitment of the government of Turkey to the security of US mission facilities and personnel.” 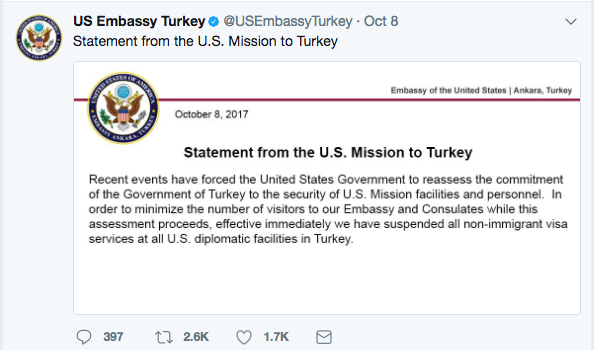 The same message was later used by the Turkish authorities

It ends, “Effective immediately, we have suspended all non-immigrant visa services at all US diplomatic facilities in Turkey.”

President Erdogan commented that “above all, this decision is saddening” and Turkish media report that political negotiations are ongoing.

Speaking with The PIE News, Serap Aslantatar, managing director of Alternatif – an education counselling agency – said that students were already concerned and those with travel plans had been calling to seek advice.

“Students are worried, but we are not panicking, we have told them we will find a way,” she said, explaining that agency staff are hopeful for a quick resolution. She said she believed that without a swift solution, the stalemate could linger on for months.

“The US is our second [largest] market,” she said, explaining that one solution to the current impasse was to try and book visa appointments in other countries for those Turkish students who held a Schengen visa (enabling travel across many European countries).

Another likely outcome, should the situation not change, would be that students keen to study English would go to the UK or Canada, Aslantatar suggested.

But the impasse would be bad news for those clients who have January start dates confirmed in the US, she said, for undergraduate and postgraduate study.

And some education agency businesses largely counsel students around Work & Travel programs in the US – “They would be affected a lot”.

According to IIE’s Open Doors, in the 2015/16 academic year, 10,691 students from Turkey were studying in the US. Turkey is the 13th leading place of origin for students.

The same data indicates that last year Turkish students contributed US$423 million to the US economy, according to the US Department of Commerce.