Posted on Aug 24, 2021 by Viggo Stacey
Posted in Covid-19, Ed tech, News, under Global.
Tagged with peer to peer, Unibuddy.
Bookmark the permalink.

Prospective students not only want the ability to connect with their peers but they expect it, peer-to-peer platform Unibuddy has said after recording more than triple the number of sign-ups in the beginning of 2021 compared to previous years.

Between January and May 2021, the platform saw 221,263 new prospects join, which the company says indicates that online peer-to-peer connections are the “way of the post-Covid future”.

“Prospects aren’t necessarily changing their choice in destination of study”

“No matter their schedule, location, or socioeconomic background, prospects can have their most specific questions answered in minutes, then continue on with their day,” the company explained, in its Navigating the ‘new normal’ report.

While the global pandemic has limited in-person contact between student ambassadors and prospective students, digital communication will “likely remain prominent”, it added.

“The HE sector has had to become digital first in the ‘new normal’ and so prospect signs ups are a lot higher than previous years,” a Unibuddy spokesperson said. “We’ve seen a spike in all countries 35+ countries.” 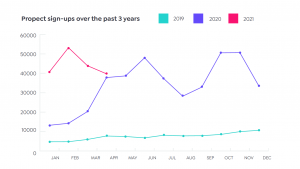 Gen Z, Millennials, and other generations, are all “keen to embrace communication innovation in the tech sphere”, the report suggested.

Additionally, Unibuddy’s expansion to the US and Canada has resulted in an uptick in prospects joining the platform, the spokesperson explained. The platform partnered with Study in the USA in 2020, and has recently raised $20m in Series B funding.

“Prospects aren’t necessarily changing their choice in destination of study but have more questions for their chosen universities,” they added.

While some student worries, such as obtaining visas during a pandemic, is out of the control of institutions, universities can “quell” student fears by putting them in touch with current students, Unibuddy suggested.

“Every incoming student deserves to know how they’ll be able to form bonds with fellow students when they arrive on your campus and that’s where peer-to-peer communication comes in.

“Your ambassador will also go on to reassure them about every other aspect of campus life right now. And if the news isn’t great, they’ll be able to frame it with kinder words than someone on Reddit will.”