Posted on Jan 28, 2021 by Will Nott
Posted in News, under Global.
Tagged with Africa, BSA, Carnegie Endowment for International Peace, ISBA, Nigeria, Spotlight on Corruption, UK.
Bookmark the permalink.

West African political elites may be channeling an estimated £30m+ of unexplained wealth into the UK education sector each year, a new report has revealed.

According to the report, published by Washington-based think tank Carnegie Endowment for International Peace, most of these illicit financial flows emanate from Nigeria and, to a lesser extent, Ghana.

It warned that UK boarding schools and universities are popular study destinations for the offspring of prominent politically exposed persons (PEPs) from the region and that immigration officials, admissions staff, and UK law enforcement are not likely to scrutinise the conditions under which the children of PEPs enrol in British institutions.

The report was written by Matthew Page, who until recently was the US intelligence community’s top Nigeria expert at the US Department of State’s Bureau of Intelligence and Research.

He explained that the “overwhelming majority” of West African students in the UK pose little or no corruption risk, but more scrutiny is required for the West African PEPs who appear to be using unexplained wealth to pay for fees.

“Tackling this small but significant illicit financial flow should be a priority for UK policymakers. In doing so, they would be helping to realise the UK’s global anticorruption objectives, advance its International Education Strategy, and close a troublesome anti–money laundering (AML) loophole.

“Failing to do so would exacerbate existing corruption challenges both at home and abroad and increase the UK education sector’s reputational liabilities,” he said in the report.

A key point examined in the report is how West African PEPs are able to afford high tuition fees when sending their children to UK boarding schools and universities.

It notes that “rapidly increasing fees, spiralling living costs, declining currency values, and stagnating salaries have made it increasingly difficult for even senior government officials to afford fees”. 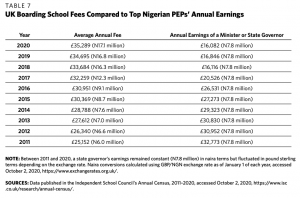 Page calls this discrepancy between salaries and fees, the “most compelling red flag” relating to West African PEPs’ payments to UK educational institutions.

According to the report a Nigerian cabinet minister takes home roughly £16,000 annually, consisting of a modest base salary plus several large allowances and gratuities.

Senior Nigerian civil servants earn even less and since April 2019, the country’s public service pay ceiling has been N6.2 million (£12,784).

In Nigeria, most civil servants and career politicians have no legitimate source of income beyond their official salary and allowances (excluding the income of a spouse) – as public officials’ earnings are constrained by the fact that a constitutional restriction prohibits them from engaging in private business. 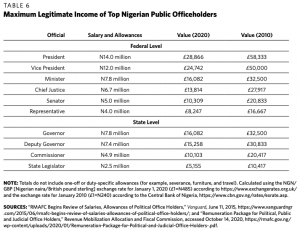 The report notes that Nigerian PEPs may claim they accumulated immense wealth before entering politics, but very few would be able to show convincing evidence of how they did so.

The report says that it appears Nigerian government officials are able to become “inexplicably wealthy” over their tenure by fraudulent means.

“They appear to use a wide range of self-enrichment tactics that include misappropriating public property, engaging in various forms of contract fraud, collecting fraudulent allowances, accepting inappropriate gifts, soliciting bribes or kickbacks, and obtaining land grants for themselves and their associates, among many other schemes.”

Nigeria has been identified as one of the African continent’s top growth markets – its HEI deficit has been seen as a potential opportunity for UK institutions to recruit from the country’s large population of young people.

The Carnegie Endowment for International Peace’s report also notes high demand for a UK boarding school education as it is used as a proven social distinction strategy by which Nigerian elites obtain and protect their status.

This, paired with the fact that UK independent schools and universities have strong financial incentives to expand their global reach, mean that institutions are at risk of becoming the recipients of illicit funds.

According to the report “scores of West African PEPs’ children attend—or have recently graduated from—UK private boarding schools and universities”.

Page explained that in at least six recent instances, a UK school or university admitted the child of a West African PEP that had been convicted of corruption-related crimes or had their assets seized by UK courts. 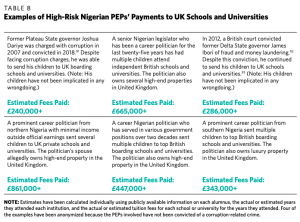 The report notes that the British government has an array of safeguards of “varying strength” to tackle corruption risks in the education sector. These include UK laws and government policies, visa checks, Know Your Customer protocols, institutional AML tools, and the use of suspicious activity reports known as SARs.

However, according to the report, to date, their implementation appears “inconsistent and inadequate”.

“The sector-wide failure to submit more than a handful of SARs each year is especially problematic, as it reduces law enforcement’s visibility on possible illicit financial inflows into the country,” the report said.

The report does note that independent schools are beginning to incorporate basic anti-corruption safeguards into their policies and practices.

“Many (though not all) schools and universities have promulgated AML policies or have added basic AML provisions to their fees or admissions policies,” the report said.

“Our schools are acutely aware of their duties under the existing money laundering legislation and we expect them to raise Suspicious Activity Reports if they have any concerns over the provenance of the money they are receiving.

“The Independent Schools’ Bursars Association provides schools with guidance verified by legal experts to further encourage vigilance against illicit wealth and our sector works with the Home Office and other agencies to ensure reporting is carried out as required under relevant laws and regulations.”

The PIE contacted UUK which was unable to comment.

However, unlike other entities involved in high-value transactions, the UK education sector is subject to loose regulatory oversight by AML regulators.

“Under UK AML rules, education sector professional bodies are not even tasked (as other high-value transaction enablers are) with self-regulation under the auspices of the Financial Conduct Authority’s Office for Professional Body Anti-Money Laundering Supervision,” the report said.

“This report should be a real wake up call to the education sector,” Susan Hawley, executive director of Spotlight on Corruption told The PIE.

“It highlights the extraordinary lack of supervision of the education sector and the lack of willingness in the sector to take money laundering seriously.

“The UK government must take urgent steps to ensure the education sector is more effectively regulated when it comes to accepting unexplained and potentially corrupt fees.”

One Response to Millions in unexplained wealth entering UK education from W. Africa