Posted on Dec 1, 2020 by Callan Quinn
Posted in Agencies, News, under Asia.
Tagged with India, UK, UKEAS.
Bookmark the permalink.

Education consultancy United Kingdom Education Advisory Service has opened its first office in India, establishing a presence in its ninth country since it launched in Taiwan in 1993.

UKEAS will open offices in Mumbai, Chennai, Pune and Bangalore in 2021

The office, located in New Delhi, is the first of 15 that are planned to cover the Indian market, slated to open over the next few years. UKEAS said it will open centres in Mumbai, Chennai, Pune and Bangalore in 2021 and the remaining 10 in 2022-23.

“There are a number of reasons why we decided to go into the Indian market,” explained regional manager Jugjit Singh Cheema.

“Demand for the UK continues to increase, and that’s been consistent for a number of years now. It’s also a very varied market as well. Both undergraduate and postgraduate numbers are increasing. The introduction of the graduate route has been very well received in the Indian market,” he continued.

“It was also in response to our university partners. A number of our partners had indicated to us that they looking to diversify their student intake, particularly from China. India offers the next big opportunity in terms of number of students and volume.”

Many universities have expressed worry over their financial dependence on tuition from Chinese students and have begun to look for ways to diversify their international student cohorts.

According to Pieter Funnekotter, CEO of UKEAS, one of the appeals of markets such as India for the company is the potential to send students to a wide range of partners. 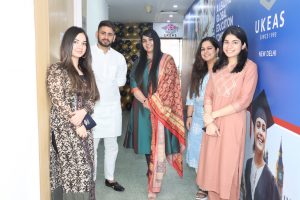 “In Taiwan, for instance, [the market is] very rankings-heavy and not that scholarship-focused compared to Nigeria, which is not at all rankings-focused and is incredibly price conscious,” he said.

“There are elements in the Indian market that are price sensitive, there are elements that are rankings-focused, and there’s a wide range of academic abilities as well, right up to the very best students in the world coming out of India,” he added, noting that markets like Ghana also enjoyed this diversity of students.

The company will be entering the market as a fully-owned enterprise and said that one of its key focuses is direct student recruitment over the subagent model, which ensures monitoring and maintaining quality, and will allow them to gather data and intelligence to share with partners.

“Something you can look forward to in 2021 is gaining more access to data in each of our markets… in what our students are saying, doing, where they’re applying, what their core searches are,” said Funnekotter.

“We hope to be able to release that data over the course of the next year or so.”

In addition to India, the company has also opened new offices in Malaysia and Ghana this year, as well as modernised existing locations in Manilla and Kaohsiung, in the Philippines and Taiwan.

“We have a fairly exciting schedule of events with regards to opening various offices,” said head of partnerships Richard Jones.

“But this is really very much part of the growth of UKEAS generally. We are going through a period of expansion and development.”

Jones further hinted at plans to open offices in new countries beyond India, while Funnekotter added that UKEAS was due to launch its official rebrand – including a new name – in August 2021.