Posted on Jul 9, 2019 by Amy Baker
Posted in News, under Europe.
Tagged with BUILA Conference, UK.
Bookmark the permalink.

British universities are missing out on a potential market of six million students enrolled with international schools around the world, because they are failing to engage with the global school counsellor market.

This was the stark message delivered by Elisabeth Marksteiner of EK MEC, a Brit who worked for many years in Switzerland as a school counsellor (and then independent counsellor), to an audience of international directors at universities.

She acknowledged that many UK universities don’t understand the crucial role that a college counsellor can play “because they don’t exist” in the UK.

But, citing the six million cohort size at international schools that was shared in the BUILA conference session by ISC research, Marksteiner warned that British universities were missing out on a market with major potential to convert into international enrolments.

Many students at international schools in Dubai, for example, were definitely intent on studying overseas, she said – and US and Asian universities were capitalising on this opportunity, just as students consulted on their options.

Step one was to engage with the global counsellor community and step two, she said, was to really effectively articulate and market a university brand.

“No university in the UK has done this well, in my experience,” she said, reminding the audience that “unless you are Cambridge, Oxford or maybe Imperial or St Andrews, the chances are that our students have never heard of you”.

US and Asian universities were capitalising on opportunity, just as students consulted on their options

At international events designed for school counsellors to meet with universities, the UK is notable for its absence, she charged.

“You are thinking too big [about your brand],” Marksteiner continued, noting that highlighting any particular rankings performance was not a way to stand out. 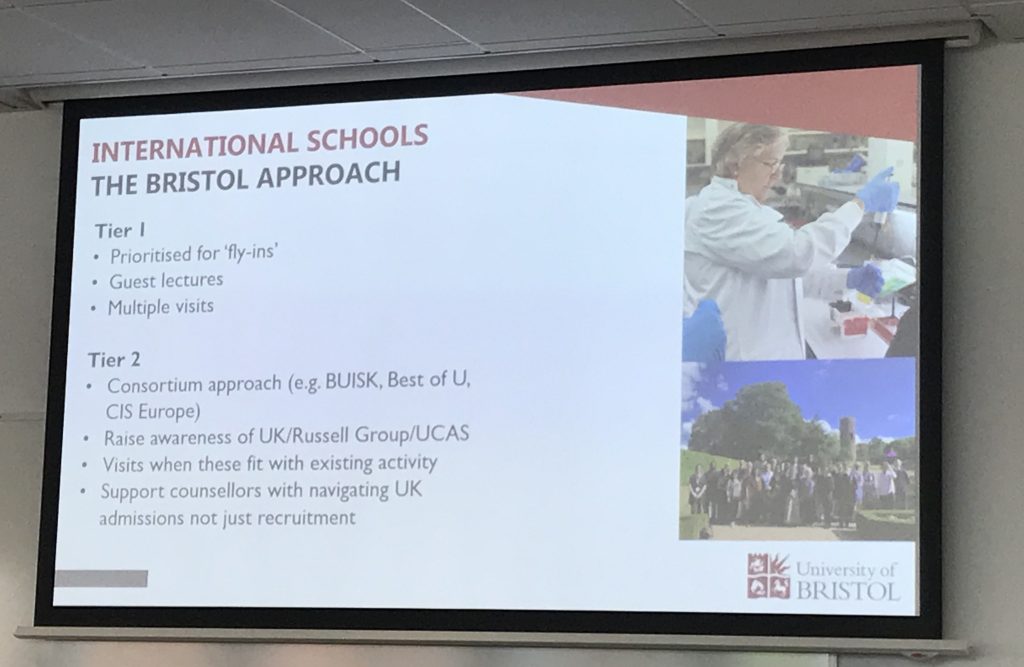 University of Bristol shared their experience of working with college counsellors.

“Really think about what you are trying to sell us,” she said. Large international schools such as UWC Singapore receive visits from up to 300 universities a year, Marksteiner related, so it was important to stand out in a tangible, emotional way.

College counsellors, whether working for one school or independently, also received invitations to visit campuses, she related.

When asked about best practice, good examples were cited of how to leave an indelible impression: attending a life drawing class within 15 minutes of being shown around a campus with artistic pedigree, or travelling on a bike at a “green campus” were ways to really create an impression, Marksteiner remarked.

Not all universities are out of the loop, however, as University of Bristol’s Charlie Pybus also shared his insight about how Bristol works with the counselling world, both via events like International ACAC and CIS-EARCOS, and by classifying all international schools into three tiers.

Tier 1 would be schools that are “high volume feeders” and schools with a strong tradition of sending to the UK/Bristol, Tier 2 would be large or medium sized schools with perhaps a US bias but awareness of the UK, Tier 3 are “the rest”.

Marketing activities and budget would be allocated to each school accordingly.

How to grow the UK’s market share was something discussed during much of the BUILA conference.

Nick Hillman of thinktank HEPI was one of many speakers who felt that better policy around post-study work rights could be in the pipeline.

“Having always believed in evidence-based policy making, I’m optimistic,” he said, about an extension of post-study work rights to two years, given that “all the evidence is stacked on the same side of the argument”.

Hillman said that whoever the new PM might be, he felt they would be a better supporter of the sector than Theresa May  – and many in the audience nodded their acknowledgement that it is Boris Johnson’s brother, Jo Johnson, who tabled the amendment to the immigration bill around extended PSW.

He also shared his view that the UK’s international education strategy isn’t ambitious enough, sharing a slide which compares the country’s new ambition with a previous trajectory outlined in 2015.

Gemma Turnbull from the Department of Education revealed that the strategy would be subject to an annual review, with ongoing input from the sector.