Posted on Apr 29, 2020 by Will Nott
Posted in Covid-19, News, under Europe.
Tagged with Coronavirus, London Econmoics, UCU, UUK.
Bookmark the permalink.

UK universities face a £2.5 billion funding black hole due to Covid-19 and the ensuing recession, according to a report released by the University and College Union.

The UK’s higher education sector has warned the British government that if they do not step in to support universities and help with the financial consequences of Covid-19, there will be job losses, huge cuts and the halting of important research.

Meanwhile, some institutions have told The PIE that they are postponing start dates for the 2020/21 academic year to try and mitigate some potential losses in new international enrolments.

According to the latest report, carried out by London Economics for UCU, universities likely to be hit hardest by the falls in fee and grant income are those that cater for significant numbers of international students.

An estimated 30,000 university jobs are at risk, with a further 32,000 jobs under threat throughout the wider economy, if the government does not intervene.

“This alarming report shows that university staff and students are now staring over the edge of a cliff and desperately need the government to step in and protect the sector,” said UCU general secretary Jo Grady in a statement.

“Our world-renowned universities are doing crucial work now as we hunt for a vaccine and will be vital engines for our recovery both nationally and in towns and cities across the UK.

Grady said it is vital that the government underwrites funding lost from the fall in student numbers. “These are unprecedented times and without urgent guarantees, our universities will be greatly damaged at just the time they are needed most,” commented Grady.

By combining the impact of the economic downturn and the expected deferral rate, the report predicts that compared to baseline (i.e. 2018-19) first-year enrolments, a total of approximately 231,895 students will no longer enrol in UK higher education in 2020-21- equivalent to approximately 24% of the baseline cohort. 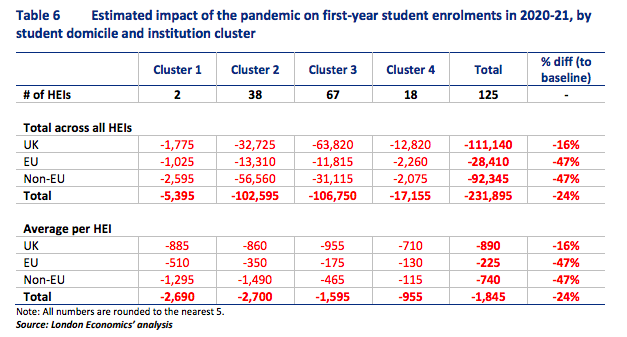 Universities UK highlighted the issue of a drop in student numbers earlier this month, warning that a 100% fall in fee income from international (Non-EU and EU) students would result in a £6.9 billion loss of income to the UK higher education sector.

It proposed a £2 billion package of measures to the UK government, to protect the HE sector from the fallout of the virus, which included doubling this year’s research funding to plug the gap for a predicted shortfall of £790 million in the 2019-20 academic year.

“Universities will be forced to make “huge” cuts, jobs will be lost, vital research will be halted”

While the government is yet to respond to UUK’s proposals, the FT reported that Whitehall officials said the early signs were that the Treasury is not receptive to what is viewed as universities’ special pleading.

Despite this, UUK told The PIE News that the package of suggested measures is with government and constructive discussions are continuing involving a number of departments.

A UUK spokesperson said that if the government does refuse to provide institutions with support, universities will be forced to make “huge” cuts, jobs will be lost, vital research will be halted.

“Regional skills gaps will worsen and most importantly students will suffer, including through reduced access to higher education and fewer opportunities for disadvantaged students,” they told The PIE.

“It will also mean universities’ positive impact on the economy and communities and capacity to help drive the UK’s economic recovery post Covid-19 will be severely diminished.”

Source: HESA, Where do students come from?

University of the Arts London is one of these seven institutions, and is trying to help international students cope with obstacles such as travel restrictions, as best they can.

UAL told The PIE that it was going to delay the start of the next academic year 2020/21 so that new and returning students have sufficient time to make arrangements to start or return to study.

“UAL is keen to do all it can to help students who want to study with us next year, to do so,” a spokesperson said.

“We recognise that the coronavirus outbreak is making it harder for students to make detailed travel plans, and for our international students to apply for visas, fulfil language testing and some other requirements.”

The autumn term at UAL will now begin on October 19, 2020, meaning that dates across the academic year have changed to accommodate the later start.