International education stakeholders have again pressed home the risk of Brexit threatening the strength and diversity of the country’s classrooms, at an event in central London.

The pipeline of academics that begin in the UK as international is under threat from Brexit, said Partridge

“The more diverse a lecture hall or a classroom is, the better the education is,” Nick Hillman, director of the Higher Education Policy Institute said. “That goes for whether they are rich or poor in the same room, or if there are different nationalities in the same room.”

“Students coming to the UK will be the rich ones”

HEPI calculated that following Brexit there could be 57% fewer EU students at UK institutions meaning, “our campuses will be less diverse”.

“Students coming to the UK [from the EU] will be the rich ones,” Hillman added at the event celebrating Password English Language Testing‘s 10th anniversary, at the Society of Antiquaries of London.

“We are very bad at sending Brits abroad to experience other cultures, and therefore it’s very important that our campuses are super diverse.”

And Robin Fletcher, CEO of the Boarding Schools Association, stated that convincing some European (notably German) agents that the country is still “open for business” is a top priority.

“Key agents have got a huge influence because parents will listen to agents,” he added. 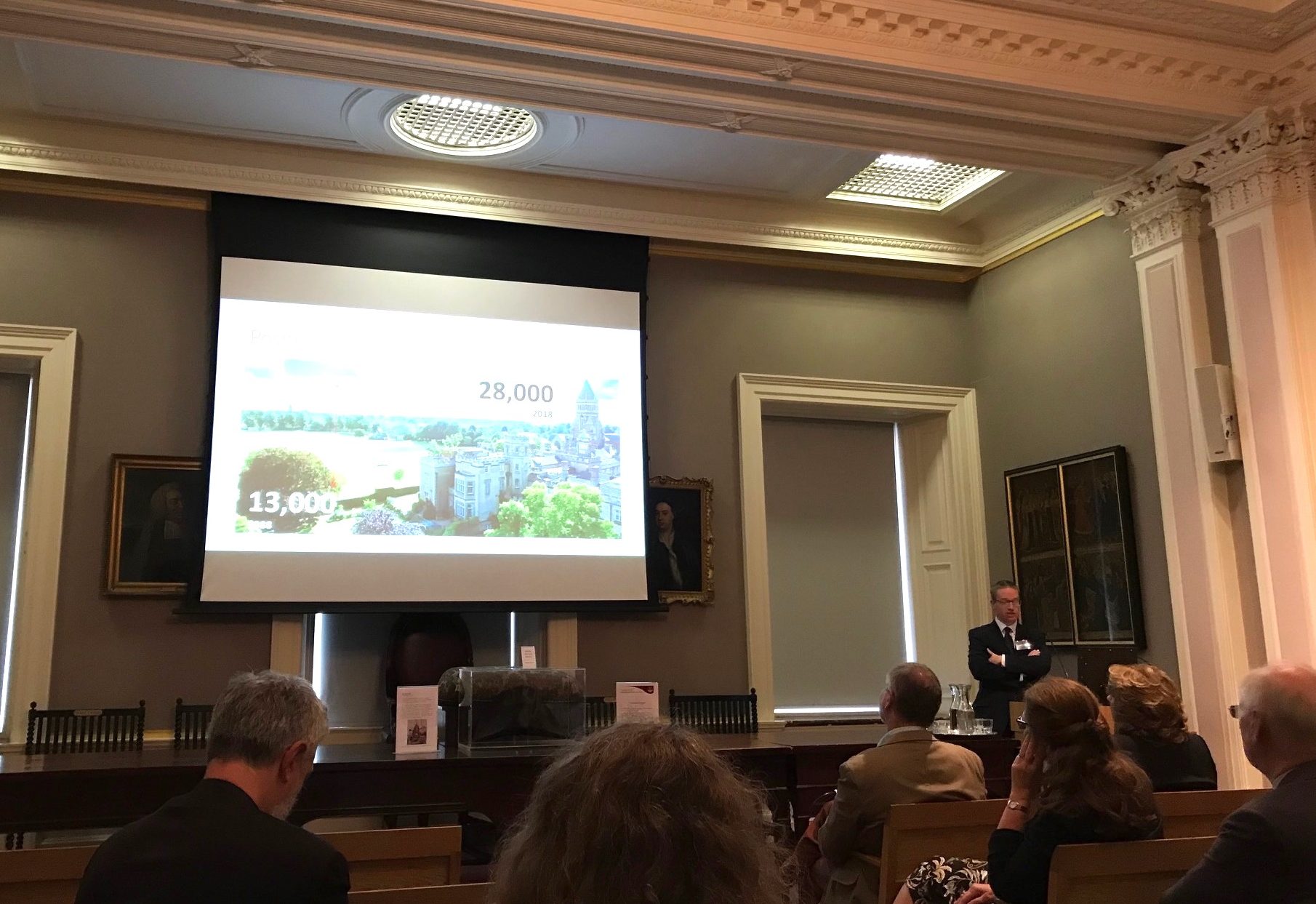 Fry pointed to an upward growth curve over 30 years

But Caroline Nixon, general secretary of BAISIS, explained that although there is a temptation to “go for the easy markets” and despite higher costs in marketing in various countries, UK boarding schools are in general successful at promoting diversity in their classrooms.

“Our UK schools are very good at [diversity],” she said. “The more nationalities you have the easier it is to get children to integrate together, and the less likely it is that you’ve got these cliques.”

Meanwhile, Amy Baker of The PIE News, chairing the panel, did remind delegates that Asian students she had spoken to did not have any negative opinion of Brexit in terms of their perception of the UK. “It’s important to remember that outside of Europe, people aren’t reading about Brexit every day like we are,” she commented.

The benefits of the UK’s TNE offer was also discussed, following a recent report that pointed out how successful the UK is at educating students offshore and the channel into study that it also provides.

We have to remember “we have a bloody good product”, said Hillman, who expanded on a view that the university sector had not effectively argued its case for remaining in the EU – in terms of the enormous benefit of research funding it can access.

“One of the things [universities] did badly was, they kept talking about the money they get from Europe. They never said what it was they were funding,” he said.

“We need to tell people the disease your grandmother is suffering from is being cured by this, not ‘my university gets £100m from Europe’ – that’s meaningless.”

Celia Partridge, assistant director of Partnerships and Mobility at UUKi, agreed that the UK may now be suffering due to the lack of clarity in how research funding from the EU will continue after Brexit.

“Anecdotally, in terms of applications for research funding across the EU where UK partners are involved, we are hearing there is less [chance] UK institutions will be the lead for that particular project,” she stated.

The pipeline of academics that begin in the UK as international students from the EU is also under threat due to Brexit, she warned.

To continue to ensure the UK university sector is seen as open for business, UUKi is pushing for more British students to study abroad through its campaign, Go International, she added.

“Canada, Australia, specifically are taking advantage of what we’re not doing”

UKCISA president Lord Bilimoria opened the event and he called for more “moral courage” among MPs to try and swerve Brexit.

He underlined that four generations of his family had studied in the UK and urged “no other country has the extent of soft power that the UK has”.

He highlighted that competitor countries were taking advantage of an increasing middle class in India that is seeking to send more students abroad.

“8% a year is the demand growth rate [for] study abroad in India and what are we doing to take advantage of that? We’re not doing anything about it. What are our competitor countries doing about it? America, Canada, Australia, specifically are taking advantage of what we are not doing.”

Australia had a minister for international education, he said [the position wasn’t continued after a ministerial reshuffle following the last federal election].

Bilimoria also called for physical exit checks when people leave the UK, to cut down on illegal immigration, which has been a key issue for prime minister May stubbornly sticking to her guns on the issue.

“Every passport, EU and non-EU, scanned in and scanned out,” he said. “The technology is there.”