A 2% rise in international applicants for full-time undergraduate study in the UK over the last year was not enough to offset a 5% fall in applicants from the EU, according to the latest figures from the UK’s university application system.

A total of 649,700 prospective students submitted their applications to university via UCAS

The data released by UCAS shows that the overall number of applicants for undergraduate study has fallen by 4%, with England, Northern Ireland, Scotland and Wales each showing individual declines.

The number of EU applicants totalled 49,250 for this year’s application cycle – a fall of 2,600 from last year’s – for entry into university in September.

EU applicants accounted for 7.6% of total applicants to UK universities.

France once again displayed the largest number of EU applicants (5,110), followed by Italy with 4,420, and Ireland with 4,360. However, all top three source countries showed a decrease.

Stakeholders have attributed much of the decline in EU applicants to the rhetoric surrounding Brexit, and the uncertainty that it brings.

“The EU market has been an area of consistent growth in recent years and the 5% fall in applications will create additional concerns,” said Pam Tatlow, chief executive of university association MillionPlus.

“There is no doubt that the government’s approach to Brexit is damaging and is creating huge uncertainties, both for EU students and UK universities.”

While this round of UCAS data measures just applications, Sarah Stevens, head of policy at the Russell Group, pointed out that it is unclear as of yet how these figures will translate into offers from institutions and acceptances.

“However, if students are being put off by the uncertainties of Brexit, this would be a concern,” she said.

Meanwhile, the number of applicants from beyond the EU rose by 1,530 to 70,830, accounting for just over one in ten UCAS applicants.

China remained overwhelmingly the top country for applicants, up 940 to 13,390. 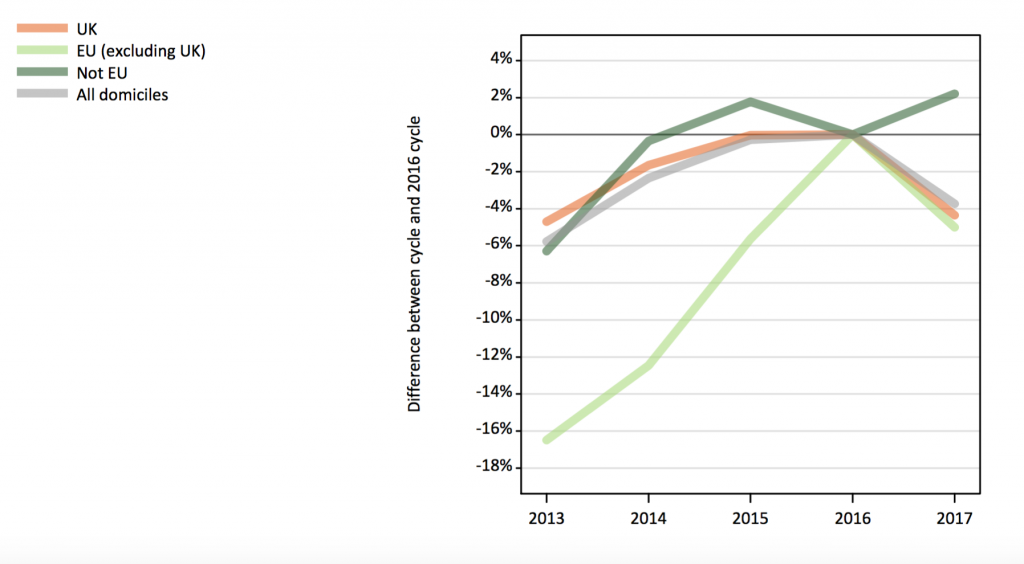 Maddalaine Ansell, chief executive of Universities Alliance, said that while the small rise in the number of international students is welcome, it doesn’t make up for the drop in EU applicants.

“This reinforces the need for the most open arrangement possible as Britain leaves the EU so that those with the talent from overseas can continue to come here to study without facing barriers,” she said.

A total of 649,700 prospective students submitted their applications to university via UCAS in the 2017 cycle, which closed on June 30, a fall of 4% on the year before.

The overall drop was matched by a 4% decline in applicants from the UK, which Shakira Martin, president of the National Union of Students, said evidence the government “urgently needs to review the education funding system”.

“Some have claimed that rising fees and the lack of proper financial support for students have not deterred people from attending university,” she said. “Clearly, this is completely untrue.”