UK higher education institutions must look at the value of their TNE partners and attempt to better understand them going forward, according to a new report from the British Council.

The Value of TNE Partnerships focuses specifically on the aim of better understanding the “value and impact” of TNE partnerships with “policymakers, sector agencies and higher education institutions”.

During an official online launch event for the report, Janet Ilieva of Education Insight set out how the evidence is clear that everybody benefits and derives value, just in different ways.

“It is a matter of understanding the value that everybody’s trying to obtain and finding ways to accommodate it,” she said.

Eduardo Ramos, director for TNE at Universities UK International, agreed that understanding was key – and that it all depends on the context of the partnership.

“I would highlight the focus on ‘context’ in assessing the value and impact of TNE.

“UK universities are sought after for their reputation for quality, and they play fundamental roles in the higher education ecosystems where they deliver TNE, but these roles vary greatly depending on context,” he told The PIE News.

“For instance, whereas in the UAE a large part of students are non-local populations (expatriates and their families) studying for postgraduate degrees, in China the vast majority of programs are taught at the UG level in partnership with local institutions, almost invariably lower ranked than the UK counterpart.

“UK universities are sought after for their reputation for quality, and they play fundamental roles in the higher education ecosystem”

“The roles played are different, in the former TNE provides an outlet to globally-minded students who wish to enhance their employment skills, whereas in the latter there’s a crucial systemic capacity building role catering mainly to local school leavers,” Ramos explained.

The report found that there was ample evidence of TNE improving the “quality and diversity” of higher education, and that national governments are in fact using TNE as another avenue of attracting international students – with less of the cost to those students.

However, it seems, there is a disconnect between UK HEIs and some of their overseas partners, as the report also states that the former perceives revenue generation “to be of much greater importance” to the latter than “is the reality”.

“If we look at what the host country institutions think about it, the real value is really placed on the quality of higher education provision and increasing diversity of hard education in the home country alongside a strengthened research capacity,” Ilieva mentioned during the launch.

The report also mentioned that TNE puts SDGs at the forefront of its activities – an encouraging stat, with COP27 looming.

“What we see across the different case studies is that all of the stakeholders report a quite central commitment to continue to pursue activities that relate to the United Nations SDGs.

“What we find here is that UN SDGs can be a common, if you like, framework that can facilitate the continuous development of TNE and also the development of new partnerships,” said Vangelis Tsiligiris, founder of TNE Hub.

One of the fundamental lessons, the report writes, from the evidence it has given, is that benefits for both parties are not “mutually exclusive”.

They vary, as the diagram shown demonstrates – from revenue generation as mentioned, to student recruitment, improved quality assurance and research growth, depending on whether it is the host HEIs, those exporting TNE or international branch campuses. 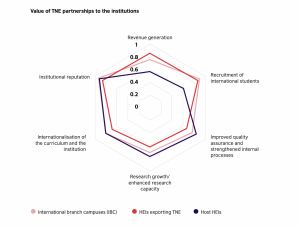 “Fundamentally, the ambitions of overseas stakeholders, i.e. using TNE to build local capacity, improve the quality of local provision and internationalise their HE systems, should be seen as priorities by UK government, sector bodies and institutions,” Ramos said.

“The financial and reputational outcomes will only materialise sustainably if there is success in the eyes of overseas stakeholders. This could be better expressed in HMG and institutional policy,” he continued.

The report agrees – regulatory and government support are “critical at the national level” in generating benefits associated with the broader value and impact of TNE.

“The UK government (as well as UK HEIs) should explicitly recognise and respond to mutually beneficial agendas. This should involve shaping policy interventions around shared benefits for the UK and the partner countries. While UK policymakers have export revenue and soft power agendas, UK HEIs will not be able to deliver these through transnational partnerships unless partner governments see those partnerships as contributing value to their country,” the report concluded.