"If only main applicants (the students themselves) are included, China has continued to hold its position as the top source of international students over the last 12 months"

Stakeholders have warned that students are likely to be left disappointed by being asked to defer their places if they cannot apply for visas as a result of not receiving confirmation letters from their institutions that they need to submit when applying.

While the reintroduction of the priority and super priority visa processing is “very welcome”, some universities are extending CAS deadlines for specific groups of students, according to the onboarding and arrival process platform.

The fresh data from Enroly found that longer waits for visas returned in August. Last week, students reporting that they’d received their visas waited an average 37.5 calendar days since their CAS was issued.

“The disparities between markets could have a significant impact on arrival,” Enroly said. Unlike UKVI which reports waiting periods as the time from date of biometrics until the visa decision, Enroly measures times as between CAS issuance and the student reporting the actual receipt of their visa.

Enroly has also reported anecdotal feedback that some universities have not received the CAS allocations that they need. Other sectors are also reporting ongoing challenges.

“We have had students drop out throughout the year, including for this fall”

CEO of internship and accommodation provider Anglo Educational Services, Steve Lowy, noted biometrics “have been an issue all year”.

“There just does not seem to be enough appointments in the US for people needing them,” he explained.

“There have been fits and starts with regards to the visas but biometrics seem to have been in short supply all year. We have gone to the extent of working with universities to get mobile units on campus to allow students to get it done there where the delays would prohibit them coming.

“We have had students drop out throughout the year, including for this fall due to the delays or inability to get appointments.”

Enroly stated that biometrics had been a problem particularly for Nigerian students, but less of an issue recently.

“UK university admissions teams are doing a brilliant job in challenging circumstances, supporting much higher volumes of students through the CAS and visa process this September intake,” John Crick, director of Enroly Services and Compliance, explained.

In the past few months, UK embassies in Greece and Nigeria have been urging prospective international students to apply for visas as soon as possible in order to avoid delays.

In June, British high commissioner to Nigeria Catriona Laing told students that they would need to apply “much earlier than you would think you would need to”. Applying in August for courses starting in September would be “much much too late”, she said.

The data from the home office indicates that in 2022, more students have applied earlier in the year when compared to 2021. This is especially apparent among applicants to non-Russell Group universities which saw 22,972 applications in Q2 this year, compared with 10,639 in Q2 last year.

It is not clear whether Q2 increases are a result of students being urged to apply earlier or the numbers have increased for another reason.

The British Council said that the 37,367 sponsored study visas were issued to main applicants in Q2 of 2022 is still “slightly below” pre-Covid figures.

“One important point to bear in mind when looking at this data is that the second quarter only represents a small portion of all visa issuances,” the organisation said.

“The majority of UK student visas are issued in the third quarter of the year, and last year only around 7% were issued in Q2. While Q2 visa issuances do give an indication of student trends across different countries, the data can be affected by shifting trends in application times and does not necessarily represent the growth in full-year visa data.”

UK high commissioner in India has also pointed out that close to 118,000 Indian citizens received UK student visas in the year up to June 2022. India has overtaken China as the largest nationality being issued sponsored UK study visas if dependents are included. The British Council noted that the growth in visas issued to Indian students in Q2 is equivalent to 187% on 2021.

New 🇬🇧 immigration stats. Nationals from 🇮🇳 No. 1 for

Data shows that Indian nationals have passed Chinese nationals for the “highest number of sponsored study visa grants for the first time since the year ending June 2011”.

Together, the top two nationalities comprise 48% of all sponsored study grants, with Nigeria, Pakistan and the US rounding out the top five.

Over the year, Indian nationals granted study visas increased by 215%, with Nigeria by 686% and Pakistan by 377%. 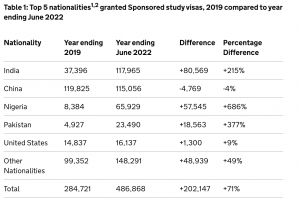 While visas issued to dependents are not included in the British Council analysis, the home office data includes dependents.

The government department also said that sponsored study visas holders “bring relatively few dependants”, with 83% of visas being issued to main applicants. One in six study visa grants are to dependents, the analysis showed, compared with one third among work visas.

“Some observers have noted that the most recent data shows that the total number of student visas issued to Indian citizens has exceeded the number issued to Chinese citizens for the first time in over a decade,” the British Council noted.

The data also shows that there were 5,056 short-term study visas granted in the year ending June 2022, 96% fewer than in 2019. Not every person requires a visa for short-term study in the UK with opportunities to study up to six months available via other visa routes, the home office added.