Higher education institutions across the UK face a shortfall of at least £463 million in the coming academic year as a result of prospective students across eight South-East Asian countries opting to cancel or postpone their study plans, British Council has estimated.

A more pessimistic scenario would see new enrolments from the eight markets plummet by over 68,000

Spending on tuition and living expenses is set to drop by £463m in this baseline scenario, the survey suggested, with student numbers declining by 12% – by around 13,539 fewer new UK university enrolments.

A more pessimistic scenario would see new enrolments from the eight markets plummet by over 68,000 – a 61% drop on the most recent year.

The UK could lose £2.3bn in tuition fees and living expenses next year, equivalent to just slightly more than the University of Cambridge‘s total income last year.

Report author and global head of Insights and consultancy at the British Council, Matt Durnin, said that while prospective international students are facing a lot of uncertainty, many are “clearly trying to find a way to keep their overseas study plans”.

“There is a window of opportunity over the next two months to create a greater sense of certainty about the upcoming academic year.

“If responses are clear and quickly communicated to prospective students, UK higher education will face a much more manageable scenario,” he said.

In the pessimistic scenario, UK universities would lose respondents who are somewhat likely to cancel, in addition to those currently “sitting on the fence”.

“If you need something to sharpen your focus on the importance of what happens in student recruitment over the next one to two months, the difference between our baseline and pessimistic scenarios is over 54,000 students and £1.9bn in direct student expenditure,” he said.

In addition, the estimates do not include current students who may discontinue their studies, the multi-year impact of undergraduate deferrals and cancellations, or students who may have already decided to cancel.

These eight markets accounted for 52% of new non-EU international students at UK higher education institutions in 2018/19, while China made up the largest cohort, at 40%.

Almost a third (29%) of respondents indicated they were likely to delay or cancel their study plans, however responses varied across the countries, Durnin continued.

“Indonesia, Malaysia and Taiwan stand out as markets with particularly strong intentions to abandon postgraduate study plans this year,” he said.

Some 39% of prospective international students from China remain “sitting on the fence” as to whether they will cancel their study plans.

The survey showed that Hong Kong stood out as the market with the most positive sentiments – 57% said that they are at least ‘somewhat likely’ to keep their plans to study abroad.

“We saw notably stronger intentions to delay or cancel study plans amongst prospective postgraduate students,” he said, adding it’s not surprising that postgrads were more likely to cancel.

“Most of our postgrad enrolments from the region are on one-year postgraduate taught courses, so disruption to the autumn term would have a significant impact on the total study experience.”

The “silver lining” for UK universities, he noted, was the “relatively more positive response” from undergraduate students.

“A drop in postgraduate enrolments would mostly have a one year impact to universities, while any undergraduate declines would feed through the three to four years of their intended course.” 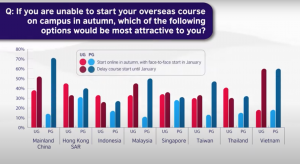 Preferences for starting course online or delaying course start dates to January also varied between the countries, as well as at course levels.

“Our survey findings do confirm the importance that many students place on an in-person start to their course,” Durnin explained.

“Around a quarter to a half of respondents said they would delay or cancel if they cannot start their course on campus in person in autumn,” Durnin added.