You are here: Home » News » UK HE: EU student acceptances up but non-EU drop

More students from the EU were accepted to a UK university than ever before in 2016, the latest UCAS statistics have revealed, though experts have questioned how long this upward trajectory will continue. Meanwhile, acceptances from outside the EU have dropped for the first time in five years.

However, the figures are being met with a degree of caution in the wake of the UK’s vote to leave the EU.

“Many will see it as great news that EU numbers continue to increase but the fear is of course whether that will continue in 2018 and thereafter if loan funding and home fees are not confirmed,” noted Dominic Scott, CEO of the UK Council for International Student Affairs.

Others are seeing the increase as a pre-Brexit rush, with students keen to enrol before the UK leaves the EU.

“The surge in EU recruitment may in time come to look like a burst of ‘buy now while stocks last’,” Nick Hillman, director of the Higher Education Policy Institute, told The Telegraph.

“For EU students, the future is likely to mean higher fees, no entitlement to student loans and tougher migration rules.”

EU students enrolling in 2017 will continue to pay the same fees as their domestic counterparts and to access student loan and grant funding for the duration of their studies, but the government has yet to confirm whether the same will apply to those beginning their studies after this point.

On the other hand, acceptances from six European countries fell. Ireland had the greatest absolute decrease, down 6% to 1,960; and Norway had the largest proportional drop, down 30% to 990. 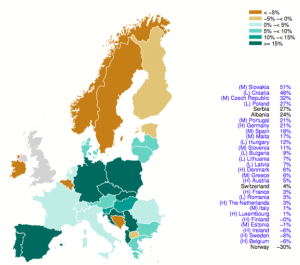 Changes in acceptances for 2016 relative to 2015, by selected European country (with GDP per capita). Image: UCAS.

The drop tallies with warnings from international education providers in recent years that changes to immigration regulations will likely deter international students from coming to the UK.

“This is perhaps no surprise and yet more evidence why any further restrictions as a result of the Home Office’s expected consultation [on international students] would be extremely unwise,” added Scott.

Future shifts in EU and international student numbers are likely to have a notable impact on demand for higher education in the UK in the next few years, noted outgoing UCAS CEO Mary Curnock-Cook.

In the report’s introduction, Curnock-Cook predicted that the UK’s higher education sector is entering “several years of overall flat demand for undergraduate education, driven by demographic changes in the young population in the UK, and perhaps strong headwinds for demand from the EU and international students.”