Posted on May 30, 2018 by Julian Hall
Posted in News, Research, under North America.
Tagged with U21, Universitas 21.
Bookmark the permalink.

Universitas 21, a global network for research-intensive universities, has released its seventh annual ranking of HE systems. It has revealed that out of 50 countries ranked, the US, Switzerland, the UK, Sweden and Denmark make up the top five.

The US, Switzerland, the UK, Sweden and Denmark make up the top five

Intended as a benchmark for ‘governments, education institutions, policy-makers and individuals’, the U21 rankings are assessed via a total of 24 indicators covering the areas of expenditure on HE; diversity; government policy, industry links, enrolment rates and research performance.

These are summed up under the four headings of Resources, Environment, Connectivity and Output.

Lead author Ross Williams of the University of Melbourne said that that the overall picture includes outcomes and specific areas of excellence behind the headline findings.

“No one nation is best at everything,” he said.

“Switzerland is best in the area of international linkages and engagement with industry; Saudi Arabia (23rd) is first for government expenditure; New Zealand (14th) has the highest proportion of international students and Canada (8th) and Russia (33rd) have the most qualified workforces.”

Williams further notes that, over the course of the seven years of U21, improving countries can be more clearly defined. 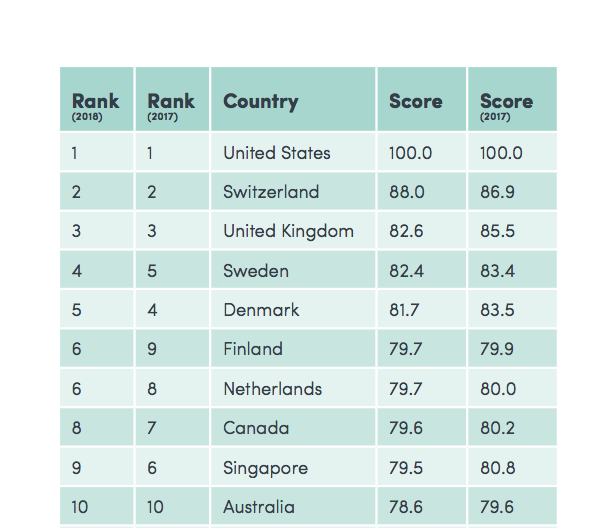 The 2018 positions of the above have seen few dramatic changes. Singapore slipped from 6th to 9th and the only change in the top 5 is that Sweden and Denmark have swapped places.

“However, we know that the global competition is getting tougher when it comes to attracting students from around the world, and if we want to provide students with top quality education in the future, it is crucial that Sweden continues to invest, maybe even more than today, in higher education.”

One of the more significant changes this year is the addition of a Research Training category in the rankings, measured by the number of PhD graduates, the income premium earned by those with a graduate degree and the ‘throughput of PhDs relative to the existing stock of researchers in higher education’.

The annual PhD completions per head of population are highest in Switzerland and the UK, explained Williams, adding: “but around half these graduate are non-nationals.”

“Through the provision of advanced training, these national systems are contributing to future economic growth, not only domestically, but internationally.”

The report recognises that the best performing countries are the ones with the highest incomes and notes that “it is neither realistic nor desirable for lower-income countries to match them, at least in the medium term”.

To mitigate this, U21 created an ‘auxiliary ranking’ taking into account differences in income levels. Within this ranking, China and SA in top 10 for output, Malaysia is in the top 3 for resources.

Summing up, Williams noted that the data can be used to provide insights into how countries can improve its performance in HE.

“By showing policymakers what works elsewhere, and what doesn’t work, we hope to contribute to improvement in systems of nations HE which are is important for economic development.”