St. Mary’s University in south-west London has signed a deal with Holmes Education Group to build a pathway college on its Twickenham campus.

SMULIC will offer foundation and pre-masters courses in several fields

St. Mary’s University London International College will be the second such partnership in the UK for Holmes, although the company does operate similar colleges in Ireland, the US, Canada, Hong Kong, China, and Australia.

“We hope to attract a cosmopolitan and diverse range of students”

Over the six-year business plan for SMULIC, as the college will be known, Joe Docherty, international director at St. Mary’s told The PIE News 1,000 new students would be enrolled.

Docherty added that this was not a singular move by the institution and that it formed part of a larger internationalisation strategy.

“A pathway college is one element of a wider international strategy which also encompasses progression agreements and articulations with overseas partners; direct recruitment through agents, exhibitions and fairs; and a greater focus on TNE,” he told The PIE.

“We hope to attract a cosmopolitan and diverse range of students from a multitude of nationalities, ethnicities and academic backgrounds,” he added.

The head of the project confirmed the university would be looking to recruit undergraduates from several global regions, namely: “east Asia and the Indian Sub-continent, West and Southern Africa, and the Gulf”.

In a statement, the partners confirmed SMULIC would offer foundation and pre-masters courses across several fields, such as business, creative media, humanities, law, science, health. A pre-enrolment English course will also be offered.

Duncan Watson, director of university pathways for Holmes, told The PIE: “we continue to believe that the opportunities a UK higher education affords to international students is second to none; we are excited at the prospect of enriching this offering yet further with the launch of St. Mary’s University London International College.”

Teaching, leisure, research and administration spaces will form the new college, which is located in an existing building across form the university.

Update: The formal signing took place in July 18 in Westminster Cathedral prior to the St. Mary’s graduation ceremony. 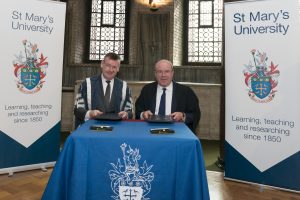 Last reply was July 6, 2018
Disclaimer: All user contributions posted on this site are those of the user ONLY and NOT those of The PIE Ltd or its associated trademarks, websites and services. The PIE Ltd does not necessarily endorse, support, sanction, encourage, verify or agree with any comments, opinions or statements or other content provided by users.