Posted on May 4, 2018 by Kerrie Kennedy
Posted in Data, News, under North America.
Tagged with SEVIS, SEVP, US.
Bookmark the permalink.

The number of Asian students pursuing academic or vocational studies in the US is decreasing, with Saudi Arabian and South Korean numbers showing “stark declines” in the 12 months to March 2018,  the latest report from the Immigration and Customs Enforcement has revealed.

There were “stark declines” in students from Saudi Arabia and South Korea of 17% and 7.5 % respectively

According to data compiled by the Student and Exchange Visitor Program, international students on F and M visas were shown to have decreased by 0.5% overall when compared to March 2017.

Europe, the second most popular continent of origin, fell by 1.1%

The largest proportion of students still hail from Asia, but when comparing March 2018 to March 2017 data, the report revealed there were fewer students from the continent studying in the US overall.

Both China and India saw proportional growth of between 1% and 2%, and were found to account for nearly half (49%) of the international student population.

However, there were “stark declines” in students from Saudi Arabia and South Korea of 17% and 7.5 % respectively.

Europe, the second most popular continent of origin, fell by 1.1%, while the numbers grew from Africa (up 1.4%), Australia and the Pacific Islands (up 3.3%). 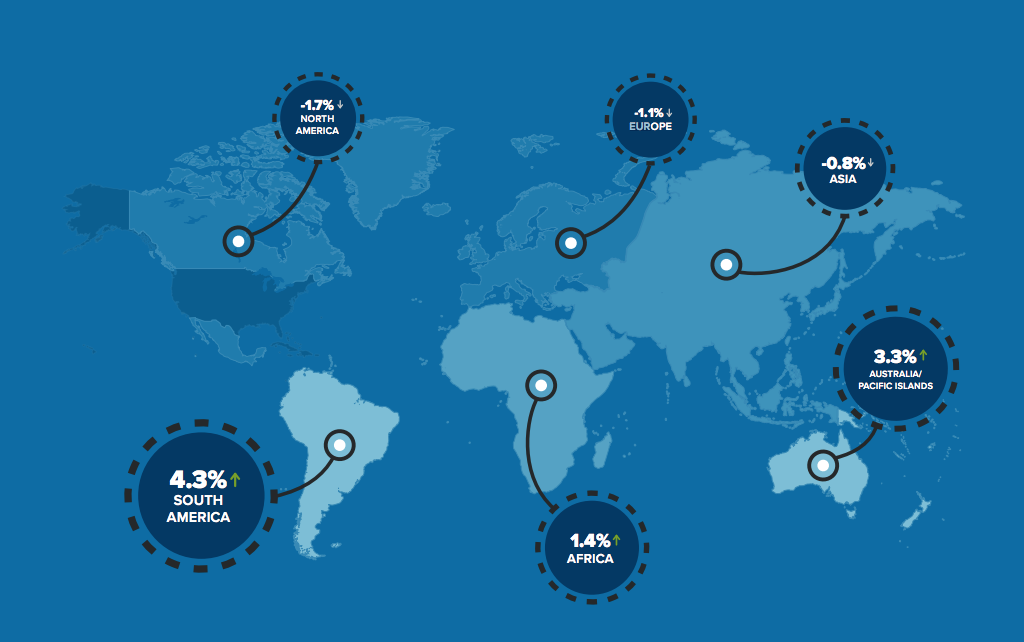 Growth/decline rates for each continent for March 2017-18. Image: ICE

Meanwhile, South America saw the largest growth in international students coming to the US to study. The number of Brazilian and Argentinean students increased by 13.1% and 6.7%, respectively.

Earlier in 2018, a survey by the Brazilian Educational & Language Travel Association revealed that Brazil had sent a total of 302,000 study abroad students in 2017, with the US ranked second most popular destination after Canada.

The countries’ lifestyle was the main reason that 6,151 student respondents chose a prefered destination, but issues of security, currency, and local culture was another consideration.

Brazil’s investment in educational programs abroad was also found to have increased 12%.

“It grew not only in volume of students but also in revenue because Brazil began to consider more diversified programs and professional specialisation,” added president of Belta, Maura Leão.

Leão told The PIE that it is of no a surprise that Brazilan students still choose the US as a study destination.

“There are all kinds of possibilities to study in high schools, colleges or universities, with different sizes, for different student profiles and spread all over the country, and above all there is also the possibility of getting scholarships, which are not very common in other countries,”he added.