In a global race to cater for a growing student population and demand for better provision, Asia is world leader for young outstanding institutions, the latest QS Top 50 Under 50 2020 Ranking  has revealed, although there are some notable successes on many continents.

Asia and Europe share the top 10 on a ratio of six to four, but Australia is the most represented nation in the top 50, and Malaysia and some Gulf States in particular show improved performances over the years.

Spread over 22 different locations, the top 50 rankings signal an increasing competitiveness in the global higher education landscape with governments worldwide striving to improve provision. India has been identified as one major country that has not seen significant rankings improvement.

“If any government might hope to receive some independent indication that it was home to young, competitive universities, it is the Indian one”

“The geographic breakdown of this ranking – with universities in Hong Kong, the UAE, South Korea, and Malaysia well-represented – helps us discern between those locations that are doing most to improve the demand for improved provision,” QS director of research Ben Sowter explained, “and those who have as yet been unable to foster institutions able to challenge established higher education hierarchies.”

The top 10, headlined by Singapore’s Nanyang Technological University, features three universities from Hong Kong, two from South Korea, three from France and one from Finland. 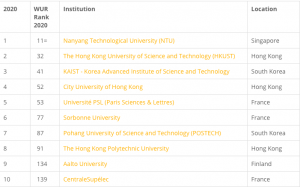 QS Spokesperson Jack Moran told The PIE that instead the most underrepresented system in the QS rankings is India, despite its urgent need to build on its HE capacity.

“No nation in the world needs to build capacity quite as much as India, which is due to have the world’s largest tertiary-age population by 2021, yet still has a gross enrolment ratio just above half of China’s (25.8% in India, 51% in China),” he explained.

“If any government might hope to receive some independent indication that it was home to young, competitive universities, it is the Indian one. Yet only three Indian institutions are ranked among the top 150 under 50, with only one in the top 100.”

Elsewhere, quality is building up, the QS rankings found. In particular for Malaysia, the results emphasise the enhancement of the country’s higher education, QS explained.

Three young Malaysian institutions have entered the top 20 since 2016. In the 2016 edition of the rankings, four Malaysian universities were featured, but none were among the world’s top 20

Around the Persian Gulf, five universities are represented in the rankings, featuring three institutions from the UAE and one from Qatar, joined this year by Oman’s Sultan Qaboos University for the first time in the top 50.

Although enrolments have slowed down and will likely continue to do so, it is estimated that enrolments will reach nearly 600 million by 2040, Sowter explained.

“In such an environment, it is clear that nations across the world will need to find ways to improve their capacity to serve the growing global student body, and an ever-larger proportion of that body will be studying at new institutions,” he said.

“We at QS believe it is essential to acknowledge those young, ambitious universities that have – in their short lifespan – achieved speedy recognition among academics and employers, have begun to conduct world-changing research, and have integrated themselves into a highly international higher education landscape.”