Posted on Mar 2, 2021 by Viggo Stacey
Posted in News, Research, under North America.
Tagged with IDP Connect, Joe Biden, US, US election.
Bookmark the permalink.

Prospective international students have overwhelmingly suggested that the change in the presidential administration in the US makes them view the country more favourably as a study destination.

The survey of more than 800 prospective international students found that the election of Joe Biden in November 2020 had led to an improved perception of the US for 76% of respondents.

Notably, 67% indicated they are now more likely choose the country as a study destination.

Carried out by data-driven insights experts IDP Connect, the survey identified that 64% of students were attracted to the US due to the quality of its teaching compared to their home country. This was followed by the perception that the country is modern, progressive and dynamic (59%), that their institution or university of choice is located there (46%), and the availability of part-time work (43%).

Some 33% suggested they were attracted to the multiculturalism of the US.

However, over 27% said the election result made no change to their likelihood to study there. Only 7% of the total respondents suggested that the result of the 2020 US presidential election meant they had a worse perception of the US.

“Since the election in November 2020, we’ve seen higher search activity for the US, with the US now overtaking the UK in regard to international student search volumes,” Simon Emmett, CEO of IDP Connect, said.

“While the new administration has a more welcoming stance towards international students than the predecessor, it will be interesting to see if student perceptions of the US as a study destination continue to improve over the long-term.”

Respondents highlighted that they expected improvements in welfare of international students, safety of citizens and visitors, post-study work visa policies and economic stability of the US under the new administration. 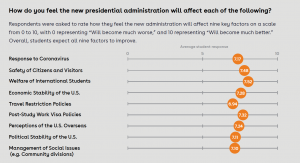 Until now, many have suggested that the election of Biden would benefit the country’s international education sector, and help to attract more international students. The evidence outlined in this survey will add to this narrative.

Emmett noted that the survey can influence institutions’ recruitment strategies going ahead.

“US universities, colleges and education institutions should be looking at their recruitment strategies and practices to ensure they capture this momentum and support students in their decision-making process,” he said.

According to IDP Connect, the survey also suggested that students “are tuned into global political discussions, and many consider these factors in their study abroad research”.

“US universities, colleges and education institutions should… ensure they capture this momentum”

“Of the students who stated they have a high awareness of US politics, 86% reported a better perception following the election,” Emmett added.

The majority (69%) of respondents also noted that they expected the new administration to have a positive effect on their home country.

The survey also revealed that students from Africa were likely to be exploring study options in the US and Canada, compared with students from Middle Eastern and South-East Asian, who tended to look at the US and UK.

The improved perceptions of the US could indicate “increasing competition” for those three destinations in future enrolment cycles, IDP highlighted.