For 46% of respondents, Australia remained under consideration as a potential destination, behind both the UK (48%) and Canada (69%)

Of the 3,650 individuals from 55 countries responding to IDP Connect’s New Horizons research, 81% of students are only considering overseas on-campus options, with 18% indicating that they were comfortable commencing their studies online provided there was a pathway for on-campus learning.

A mere 10% of respondents said they would consider a complete online-only study option, concurring with previous surveys suggesting that 69% of students are concerned that online courses lack the “international exposure” they were hoping to gain.

“These latest results reinforce students’ desire to gain an overseas qualification and the rich cultural and educational benefits that come with doing so,” Simon Emmett, CEO at IDP Connect, said.

“However, students want to be clear about the value and the outcomes they will gain. The countries and institutions that can offer and communicate clear pathways to employment or migration will be most popular as the world continues to re-open from the pandemic,” he added.

For respondents who said they were interested only in campus-based study opportunities overseas, 66% said they were led to study at highly-ranked institutions, while 65% of respondents said access to post-study work rights is a key lever.

An additional 63% said the ability to use their qualification as a pathway to migration made the study option more attractive.

Other motivational considerations include the ability to work part-time while studying, the affordability of tuition fees, and the cost of living, IDP added. 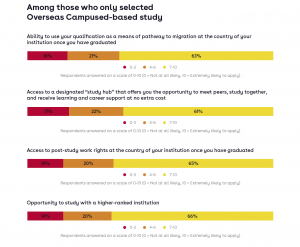 “These pathways to employment are also an important opportunity for Australia, as they can act as a solution to the nation’s critical skills shortage in key sectors, particularly in technology and technical roles,” Emmett added.

Respondents were mainly based in South and South East Asia – 1,133 and 583 of respondents coming from India and the Philippines, respectively.

The survey, carried out between August 27 – September 10, also charted the popularity of traditional study destinations with Canada being selected as first choice destination by 39% of respondents. Both the US and the UK each garnered 17% of respondents saying the same, while 16% said Australia was their first choice. New Zealand was selected by 4%, Ireland 1%. A further 7% suggested alternative destinations.

IDP has previously suggested that the UK and Canada both clarifying vaccine policies for international students had “factored into [students’] decisions on preferred destinations”.

Students from China – not representing a significant share of respondents to this latest survey – place a greater emphasis on safety than students from India and other key markets, IDP also previously said.

For 46%, Australia remained under consideration as a potential destination, behind both the UK (48%) and Canada (69%), IDP highlighted.

“If Australia can offer prioritise employment pathways that address gaps in particular skills and industries, the international education sector can deliver a win-win-win for students, institutions and the nation,” Emmett suggested.

He has also previously suggested that there is a “real risk” of being perceived as a country that is less “open for business” – as is the situation for some cohorts for Australia and New Zealand.

“With the majority (71%) of respondents intending to commence study in 2022, there is a need for Australia to act quickly and provide a plan to get international students back for on-campus learning as it prepares for a rebound.”