Applications to MBA and business master’s programs at graduate business schools are seeing an increase from international students as those from domestic students have seen a fall over the past year, a survey has suggested.

A 3.8% decline from domestic candidates led to an overall increase of 0.4% in graduate business school program applications, the 23rd iteration of the survey found

The annual 2021 Application Trends Survey, carried out by the Graduate Management Admission Council™, found that applicants whose citizenship differs from that of the country where the program is located increased by 4.1% in 2021 compared to the previous year.

Additionally, the share of full-time two-year MBA programs showing growth in applications from international candidates has doubled from 28% in 2019 to 57% in 2021.

Some 73% of US programs ranked in the top 50 of the US News & World Report saw international candidate applications increase, while only 41% reported rises from domestic candidates.

Among the top 50 programs in the Financial Times rankings, 66% recorded growth among international applicants. The 19 responding programs ranked between 51-100 saw 58% report growth from international candidates. 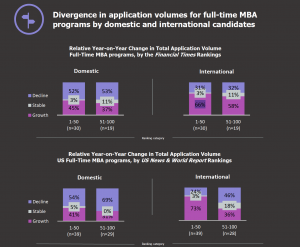 “While the disruptions caused by the pandemic have not disappeared, the confidence of applicants in overcoming disruptions has strengthened,” he noted.

“Data reaffirms that in times of economic uncertainty, many candidates invest in graduate management education to emerge on the other side more career-ready. The pent-up demand among international candidates drove the application volumes at many business schools.

“Demand for international education was strong even in the middle of uncertainty, however, inability to translate demand in actual experiences was the key challenge.”

One respondent to the survey from a UK business school suggested that the two-year work visa may have led to a “very significant” increase in number of applications from India.

An admissions officer from a business school in the US reflected that the easing of Covid-19 restrictions or an improved perception of the US could have generated an increase in international applications.

A 3.8% decline from domestic candidates led to an overall increase of 0.4% in graduate business school program applications, the 23rd iteration of the survey found.

The survey garnered responses from 967 programs at 269 business schools worldwide, with data collected between July 8 and August 23, 2021.

More programs in Europe, the US and the UK reported decline in applications from domestic candidates when compared with other regions, it also suggested.

Across Europe, 58% of programs recorded growth in applications from international candidates while only 31% did the same for domestic candidates.

In the US, 43% of programs saw application growth among international candidates.

The survey also found that 52% of full-time one-year and 56% of two-year MBA programs recorded increases in applications in 2021 – higher that the average of 41% of all programs.

Additionally, some business master’s programs are also seeing strong demand led my markets such as India, he added.

“For example, the share of Master of Information Technology programs reporting growth in applications from international candidates increased from 33% in 2019 to 57% in 2021. Nearly half (49%) of master in management programs continued their growth momentum in 2021 and reported growth in applications. However, much of this growth was driven by international candidates,” he said.

Overall however, MBA programs geared towards working professionals saw the lowest level of application growth since 2017, the report found.

Some barriers around visa policies and learning modalities have not entirely faded, Choudaha said.

“However, data shows that overall deferral rates halved from 6% in 2020 to 3% in 2021. This suggests that compared to 2020, schools became more selective with their policies, and candidates became less concerned about the pandemic,” he added.