Brooklyn School of Languages, BSC Ardingly Campus, ILSC and Lexis Korea won awards for the second year in a row

After analysing more than 7,000 students’ satisfaction reviews and more than 180 ESL team members’ ratings received over the last 12 months, language travel agency ESL awarded the nine prizes at a ceremony at its fifth annual workshop in Sitges, Spain.

Competition was very tight this year, in some cases scores coming down to two decimal places, according to ESL.

“Because the system to sort nominees and awardees is based on data coming from students and staff ratings over the last 12 months, we could see how tight it is as differentiation is often at second decimal level,” explained ESL’s head of Products Development & Purchase, Krister Weidenhielm.

“This reflects the overall high quality standards of our global partner schools’ portfolio,” he said, adding, “Congrats to the winners, but also to all schools”.

Four of the nine awardees won for the second year in a row, which shows “sustainable student satisfaction ratings as an evidence of continuity in their respective best practices”, Weidenhielm noted.

Lexis Korea‘s managing director, JeeHo Kim, said the school’s 2017 win inspired the team to work harder to provide the best possible experience for its students. He expects this year’s win to met with the same enthusiasm at the company. 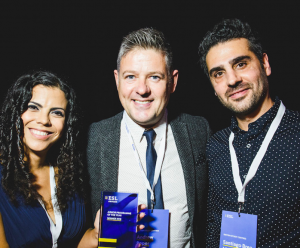 “As the ESL Awards are judged in equal parts on feedback from our students, ESL counsellors and ESL back office staff, I believe they are they offer the most comprehensive overview of the operation of our school, all the way from initial marketing and registration through to the quality of the classroom experience that we provide our students,” Kim said.

“As a relatively new provider operating in a less traditional area of language study, it’s a real boost to us to receive this kind of very positive feedback on our operational systems and academic practice.”

Frederic Parrilla Garreau, deputy director of Leisure Program of the Year winner, CLIC International House, Spain, said a full-time head of the cultural and leisure program at the school ensures new leisure options are available in the city for its students, to “make people love our city, our language and trigger their motivation”.

“Because these prizes are given by the students themselves and it is based on students’ ratings, it has passed the most difficult exam: the clients’ assessment,” he told The PIE News.

“Actually, it is the best recognition one could ever get.”

“Lots of hard work is put in on a daily basis from our accommodation team to find top Swiss quality housing options for our students studying French in the “Pearl of the Swiss Riviera – Montreux,” he said.

Alpadia is an independent commercial entity but was previously part of the ESL education group, before it rebranded and commercially split in 2014.

More photos from the event are online here.