Posted on May 5, 2021 by Will Nott
Posted in News, Research, under Europe.
Tagged with Covid-19, Netherlands, Nuffic.
Bookmark the permalink.

Large numbers of international students have said that they intend on studying at higher education institutions in the Netherlands in the coming academic year, a new survey by Nuffic has found.

"respondents from the European Economic Area (EEA) indicated that it was very likely they would study at a Dutch HEI in the coming academic year (86.1%)"

The research by the Dutch organisation for internationalisation in education analysed the responses of 526 international students and was carried out between March 9 and March 24, this year.

“International students are very interested in coming to study in the Netherlands, despite uncertainties due to the corona crisis”

Around three out of four of the international students (73.1%) who took part in the survey said that they are either “very likely” or“likely” to study at a Dutch HEI in the coming academic year.

“International students are very interested in coming to study in the Netherlands, despite uncertainties due to the corona crisis,” Nuffic said in a statement.

“They do so primarily because of the quality: Dutch education has an excellent reputation among international students.” 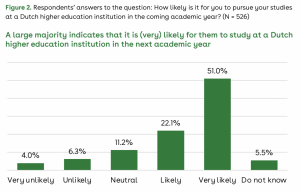 The quality of Dutch higher education is “beyond dispute among these foreign students”, it added, explaining that almost 90% of the respondents cite the quality of education as an important reason for coming to the Netherlands.

“Other reasons for choosing a Dutch study program also revolve around quality. For example, students indicate that a Dutch diploma is of great value on the international labor market, that there are many programs taught in English and that the reputation of Dutch educational institutions is good.

According to the report, respondents from the European Economic Area indicated that it was very likely they would study at a Dutch HEI in the coming academic year (86.1%) more often than non-EEA students did (72.6%).

Most respondents (62.7%) had already submitted their application to a Dutch research  university or university of applied sciences.

The survey also found that online education may change the plans of students – about half said they were less likely to come to the Netherlands if education was mainly provided online.

“In addition, students indicated that they are concerned about travel restrictions due to the coronavirus,” it added.

“Other negative factors that influence the choice to study in the Netherlands include study costs and the cost of living and student housing.

“Almost half of the students surveyed are also currently considering studying in another country. Students from outside the EU are much more likely to consider this than EU students.”