“International education enriches our province in many ways and helps Manitobans develop global networks, which create economic opportunities and respect for other cultures,” said minister of education and training Kelvin Goertzen at the official proclamation.

“International education enriches our province in many ways”

“By proclaiming 2019 as the Year of International Education, we will promote our province as a global destination of choice for international students, researchers, workers and entrepreneurs to study, work, invest and live in.”

Manitoba’s capital Winnipeg is set to be in the industry’s spotlight this year, as it will host the annual conferences of three major associations: Languages Canada in February, the Canadian Association of Public Schools – International in April and the Canadian Bureau for International Education in November. 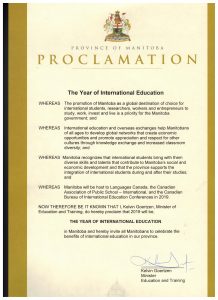 The Manitoba Council for International Education said in a statement that the organisation is “extremely pleased” with the announcement, a sign of the provincial government’s ongoing commitment to international education.

The proclamation could also extend awareness of the benefits the industry brings to the province to the wider public, MCIE president Carmelle Mulaire said in a statement.

“We are extremely pleased with the announcement from the government of Manitoba. We hope this will serve to remind Manitobans of the contributions, both economic and social, that our industry brings to the province,” she said.

The 28-member organisation signed an MoU with CBIE last year to renew its collaboration on international education.

A report released late last year by MCIE showed that International education contributed $374 million to the province in 2016, showing a 30% increase from the previous year.

One Response to Manitoba declares 2019 year of intled