Brooklyn School of Languages in the US has been named English school of the year by one of Europe’s biggest education agencies, ESL, while Institut Européen de Français Montpellier in France has taken the title for non-English language schools in the inaugural ESL Language Travel Awards.

"I have been lucky enough to have had an incredible group of staff, who have all been committed to making the school the best that it can be from day one"

The awards were launched to mark the agency’s 20th anniversary and presented at the agency’s annual workshop, which took place in Montreux, Switzerland last week. The awards took into account analysis of more than 7,000 student satisfaction reviews and feedback from more than 180 ESL staff members over the last year.

“Staff were asked to rank: how does that school make their daily life easier?”

EC Brighton and BSC Brighton in the UK also scored highly in the school of the year (English category), while Escuela de Idiomas Nerja in Spain and Linguaviva Firenze in Italy came third and fourth in the top 10 schools of the year (other languages).

“At BSL, I think I have been lucky enough to have had an incredible group of staff, who have all been committed, both individually and collectively, to making the school the best that it can be from day one,” commented Rich Ambler, school director at Brooklyn School of Languages, citing its teaching quality, pastoral care and service to agents.

EC was named school group of the year – an accolade reserved for chains with five or more members. BSC came second, with St Giles International, Kings Education and Lexis rounding out the top five.

“One of our intentions is obviously to use that ranking and reward the [schools] who really perform in an outstanding way, and not only to congratulate them, but also to make it visible to students – because I do check reviews and ratings when I buy something, and I’m sure you do too,” Krister Weidenhielm, head of product development and purchase at ESL, told The PIE News.

EC also took home the title of corporate social responsibility champion of the year , which was decided based on schools’ self-assessment results using ESL’s CSR tool.

For the rest of the award categories, the rankings only took into account schools which had received a minimum number of student reviews on ESL’s website over the last year (between 20 and 40, depending on the category). ESL’s products, sales and registration teams also weighed in on the rankings. 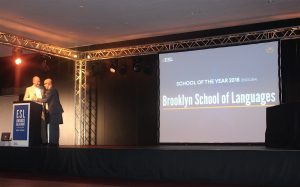 Brooklyn School of English received the ESL Language Travel Awards for School of the Year (English) at the ESL Workshop in Montreux, Switzerland last week. Photo: The PIE News.

Weidenhielm said the company wanted to include a B2B perspective in the awards by including staff perceptions of schools.

“In a nutshell, staff were asked to rank: how does that school make their daily life easier?” he elaborated, saying staff took into account factors such as the quality of information about the school, response times, friendliness and adherence to deadlines.

“We’re very proud of our young learner programme in Torbay,” commented Michelle Ramos-Bailey, executive manager for LAL schools in the UK. “Our mixture of education and fun in a safe environment is the ideal combination to create a great experience for our students.”

Beyond programming, Kings London took home the award for school facilities of the year, and IH Belfast was named as the school with the best accommodation.

“It’s amazing to win this award particularly as these ESL Awards are based on staff and student feedback,” commented Paul McMullan, director of IH Belfast.

“The team at IHB work incredibly hard across all the services we provide and enjoy doing it at the same time. That’s the key.”