Over 57% of India’s middle-class families are “inclined to spend” on overseas education, according to new research.

According to a pan-India study abroad survey by Leap and global market research company Ipsos, prospective students from households with an income of between 300,000-10,000,000 INR($3,700-12,000) are increasingly hoping to study overseas.

The study also found evidence that non-English speaking destinations are gaining popularity with Indian students. Some 42% of students surveyed were open to destinations beyond anglophone countries that don’t have English as their first language.

The report was launched at the Leap Global Edu Forum 2022 in New Delhi as part of the Leap-IpsosStrategy3 initiative.

Speaking at the launch attended by Indian stakeholder including investors, thought leaders, startup founders and education influencers, Vaibhav Singh, co-founder of Leap, commented on what the findings meant for the future of Indians wanting to study abroad.

“Fuelled by the student community’s growing aspirations, the Indian overseas education market is expected to grow multi-fold and will see over two million Indian students fly out by 2025 spending over $100 billion on their international education,” he said.

“This is a huge opportunity and the sector will see a meteoric rise in demand for innovative products and services. With the launch of this report, we aim to contribute immensely to the understanding of India’s overseas education industry and what it holds for the future.”

One statistic highlighted in the report that will positively support the work of LeapFinance was that 62% of respondents showed increased trust in opting for education loans. A further 83% of respondents also believe investment in a foreign degree will give them an edge over peer competition in the jobs market.

Deepak Hanumantharayappa, partner and country head at Ipsos said, the two companies had “conducted a highly comprehensive study exploring every aspect from inception to admission for aspirants”.

“Talking to so many aspirants across the length and breadth of the country, the study maps the mind-scape of students including sources of information, how the process starts for them, motivations for studying abroad, processes, hurdles and how they overcome it, policies and the government role as enablers,” Deepak continued.

“One thing is absolutely clear, everything needs to sit at one place to ease it for the aspirants as we are likely to see a quantum jump in those opting for overseas courses.” 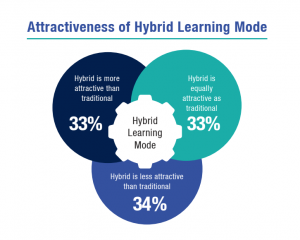 While the report showed 80% of the Indian study abroad market would prefer to reside on campus in face-to-face learning interactions, there was still notable interest in hybrid format learning.

Leap recently raised a further $75 million USD in Series D funding in 2022 to further enhance its hybrid partnerships portfolio and has since announced hybrid degree programs with institutions such as Colorado State University.

Ispos’s findings were based on surveying over 500 respondents across India. About 60% of the aspirants covered were male, with 39% female. Approximately two thirds of those interviewed were observed in the 18-24 years age group; with 34% from the 25-30 years age group.