As the international education sector searches for diversity within international student recruitment, Central and Latin America are often considered emerging markets with countries like Brazil and Colombia showing steady growth in the numbers of students interested in studying abroad.

A recent agent opinion survey, conducted by EdCo LATAM Consulting, revealed insights into which study destinations are in demand and why.

The survey polled 22 leading agents that operate in countries such as Argentina, Bolivia, Colombia, Costa Rica, Cuba, Chile, Ecuador, El Salvador, Guatemala, Honduras, Mexico, Nicaragua, Panama, Paraguay, and Peru. Some also have branches in the US and Canada.

Canada (72%) and Spain (72%) were named as the leading countries that agents would like to increase working with, as 16 of the agents selected them as priority markets, followed by the UK (50%) and Germany (40%). 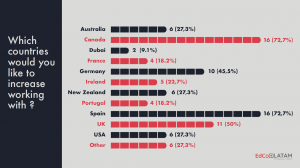 When asked directly which destination agents felt would be the most popular for students applying in 2023, the overwhelming response was Canada (78%) compared to the UK (9%), Australia (5%), Spain (5%) and Germany (5%).

The US is still the biggest study abroad market for wealthier South American families, however the majority of agents in the region have historically struggled to secure contracts with US schools and colleges.

When it came to operations, 62% of the agents surveyed said that the presence of aggregators in the region had positively supported their recruitment operations. This response reflects the increased access to commission income through digital marketplaces that was previously unavailable, with one agent explaining working with aggregators “expands our portfolio of partners”.

However further comments in the survey suggest that there is a strong appetite for agents to increase partnerships with global institutions directly, saying “we like to have direct contracts with universities and don’t have to share commissions”.

This will be positive news for universities aiming to build their agent networks in unsaturated markets. 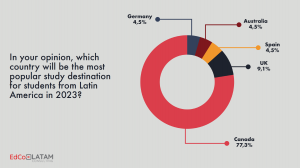 EdCo is a business development firm specialising in higher education recruitment in Central and Latin America. The company operates across key markets including Colombia, Mexico and Brazil, working with institutions to manage in-country presence, agent networks and recruitment campaigns.

Simon Terrington, director and founder of EdCo LATAM Consulting, said, “We are delighted to release our Latin America agents survey results as they give a really good insight into agent sentiment across Latin America.

“We hope that institutions will find the results useful when planning marketing and recruitment activity in the region.”

“The LATAM market is growing a lot after the pandemic”

The agents surveyed were buoyant about the future of the recruitment over the next five years, with some saying “the LATAM market is growing a lot after the pandemic due to the political and social situation”. Brazil is one of the most populous countries in the region currently holding national elections.

Other agents felt that increased use of digital technology rather than office-based recruitment would unlock access across such a vast continent. One agent commented, “We believe agencies will reduce office operations and grow with the use of technology”, and that “new destinations will evolve and online programmes will become more prevalent” over the next five years.