Ireland wants 15% of students at tertiary level to be international by 2020, which means current enrolment numbers need to grow by a third to reach this target. It also has intentions to increase ELT enrolments by 25% in the next four years and see offshore enrolments grow from 2,600 to 4,500.

"We are one of the most globalised countries in the world"

The latest country to outline bold growth plans, Ireland’s ambitions were unveiled in its new strategy, Ireland Educated, Globally Connected which sets out to provide “a high-quality experience for all learners”.

He added, “I believe that, with the additional supports being put in place as a result of this strategy, this figure is fully achievable. This strategy represents a key element of Ireland’s growth strategy for the next five years.”

“Within the national policy-context of increasing domestic demand for higher education, which is expected to rise year-on-year until 2027  and of national targets for widening participation, it is agreed that the aspiration for international students to represent 15% of full-time students remains challenging but valid as a medium term goal over that period,” the strategy reads. 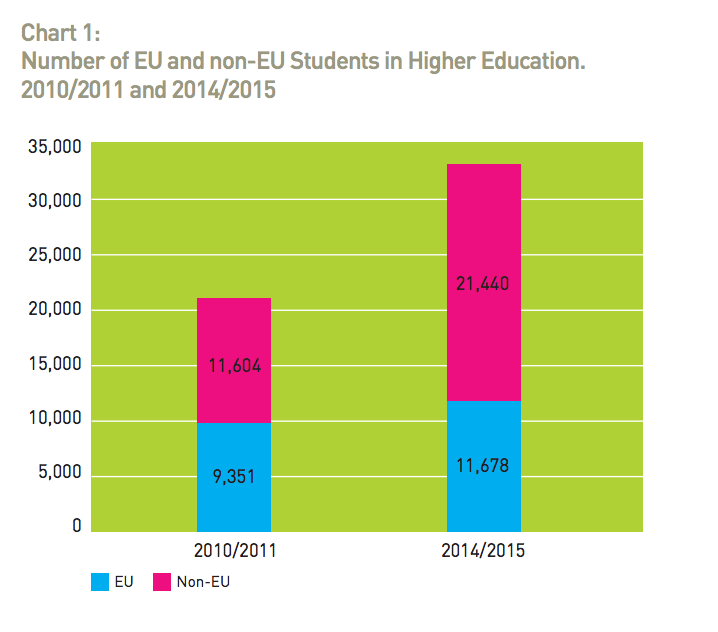 In the last five years, international enrolment at public funded institutions has growth 58% to 33,118 students, mostly driven by non-EU enrolments, with the largest increases seen among Asian and Latin American student cohorts.

To expand its international outreach, the strategy intends to use Education in Ireland and the Department of Foreign Affairs and Trade, in particular through its embassy network, to play a key roles to promote Ireland “as a centre for human capital development to governments, agencies, institutions and businesses where opportunities are identified”.

“We are one of the most globalised countries in the world,” commented Bruton, “and compete successfully internationally on the basis of a highly educated and talented workforce.” He underlined that Ireland is home to nine of the top 10 ICT companies in the world.

Funding for higher education will be increased, the strategy states, a welcome announcement for HEIs after the country’s economic crisis strained financial support for the sector.

“The previous strategy lost some momentum as a result of government focus on other areas arising from the wider economic challenges which Ireland was facing,” noted Sinéad Ryan, director of internationalisation at Trinity College Dublin.  Ryan lauded the new plan’s recognition of international education as a driver for economic growth. “It also clearly recognises that national government investment is a critical precursor to international success. This is very welcome,” she added.

The department of education and skills noted that funding will be directed at “key target markets such as the US, China, India, Brazil, Malaysia and the Gulf Region, while we will be increasing our focus on high potential market opportunities in countries such as Canada, South Korea, Vietnam, Indonesia, Mexico, Chile, Argentina and Nigeria”.

The government also has plans to amend its current 12 month post-study work scheme in order to “further incentivise high performing students to come to Ireland and to remain on after their studies, to meet the present skills and language needs as identified by business”.

Anna Cunningham, director of the international affairs office at NUI Galway  meanwhile welcomed the strategy saying the targets for inbound and outbound mobility are “attainable”.

She added that “swift implementation of the key actions such as extension of the 12 month stay back option” as well as “significant investment in the brand ‘Education in Ireland’” are needed as well as enhanced provision of scholarships  “to bring us in line with other main English speaking destination countries.”

A review of scholarships will be undertaken, the strategy states, defined by a set of “new and high potential markets”.

Quality assessment, meanwhile, will be boosted through the development of the International Education Mark, a seal of approval authorised by Quality and Qualification Ireland for providers who comply with a code of practice that relates to protection for enrolled learners, recruitment and admission, information provision, student welfare, cultural awareness and academic support provisions.

Quality will underwrite the overall ambition and direction of the strategy. “The 2010-2015 strategy made clear that quality should be at the heart of internationalisation,” notes the new strategy, which also highlights a commitment to increase outbound student and academic mobility from Ireland.

The strategy also nods to Ireland’s neighbour, the UK, and its decision to leave the European Union. “In light of the recent referendum on the future of the UK in the European Union, negotiations on the future EU-UK relationship will now be required and the Irish government will continue to emphasise our very particular relationship with Northern Ireland and the UK in these negotiations, a fact that is widely understood by our EU partners,” it reads.