Posted on Oct 16, 2019 by Will Nott
Posted in News, under North America.
Tagged with DBEDT, Hawai'i, Study Hawai'i.
Bookmark the permalink.

International students contributed US$447 million to the State of Hawai’i in 2018, with the majority (71%) enrolled in short-term programs, according to a report by the Department of Business, Economic Development and Tourism.

The ‘Economic Impact of International Students in Hawaii’ report surveyed 41 educational institutions in Hawai’i, with respondents accounting for a total of 14,300 international students.

The report showed that the direct spending of international students amounted to $216.9m, while the economic output generated by direct, indirect and induced effects amounted to $446.7m.

The figures also showed that short-term courses were popular with students, making up 71% of all studies. By contrast, long-term courses accounted for 29%.

Although the data presented is not directly comparable to last year’s survey due to changes to methodology and numbers of survey respondents, a number of programs reported “an increase in short-term students and a decrease in long-term students”.

But while there were fewer students studying on long-term courses in 2018 they had a greater impact on the economy than those on short-term courses, due to the fact they brought in more revenue for universities and paid expenses such as rent and groceries. 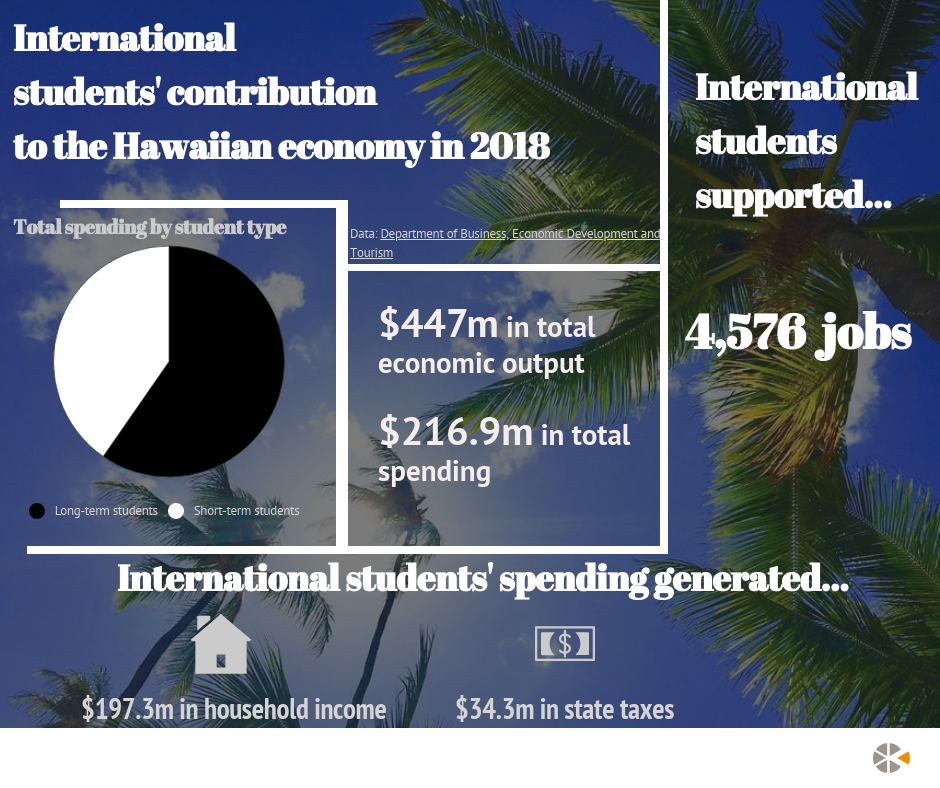 As well as showing the economic impact of international students, the report highlighted diversity at Hawai’ian educational institutions, with over 80 different countries, including Denmark, Mongolia, Vietnam and Tonga represented on courses.

Joel Weaver, president of Study Hawai’i told The PIE News that with its central location in the Pacific, Hawai’i continues to be a bridge between Asia and North America.

“The many universities, colleges, high schools and language schools that accept international students in Hawai’i pride themselves on how our location and quality of education not only attracts students from so many diverse places but also contributes to the economic well-being of the state,” he said.

Weaver said international students continue to play an important role on both the economy and cultural life of Hawai’i.

“Those of us who work with students from other countries on a daily basis know how critical this work is to the community and the future of global peace and understanding and it is gratifying to see that it is also recognised as an important part of the state’s economic health,” he added.