You are here: Home » News » Immigration » International student value to US is $30.5bn

With new Open Doors data out which shows almost a million international students are now studying in the USA – with a 10% growth rate in the last year – NAFSA has revealed that the value of international education to the US now totals US$30.5 billion.

"Congress must pass common-sense, comprehensive immigration reform in order to improve the face we show to the world"

This figure means that three jobs are created or supported for every seven international students present in the US, according to NAFSA, which has created an interactive tool detailing trends by state and by timeframe.

“We are a nation that prides itself on welcoming immigrants to this country to visit, study or work,” explained Johnson. “But as we witnessed last week with the court’s decision to temporarily block immigrant deferred action programs, our immigration system is broken.

“Congress must pass common-sense, comprehensive immigration reform in order to improve the face we show to the world, build more meaningful relationships with future generations of foreign leaders, and not lose out on the economic, academic, and cultural contributions from international students.”

Johnson added that while foreign students “only comprise less than 5%” of enrolment in US colleges and universities, “they continue to bring billions of dollars to our nation’s economy and hundreds of thousands of jobs for the American people”.

Looking at data by state, Texas – which blocked the deferred action programme last week – is one of the top three receiving states for international students. The state saw almost 18% growth in enrolments in the 2014/15 academic year.

One in three international students studies in California, New York or Texas.

Number-one state, California, saw 11% growth in enrolments and international education generates US$4.6 bn in revenue for the state; creating or supporting 52,624 jobs. 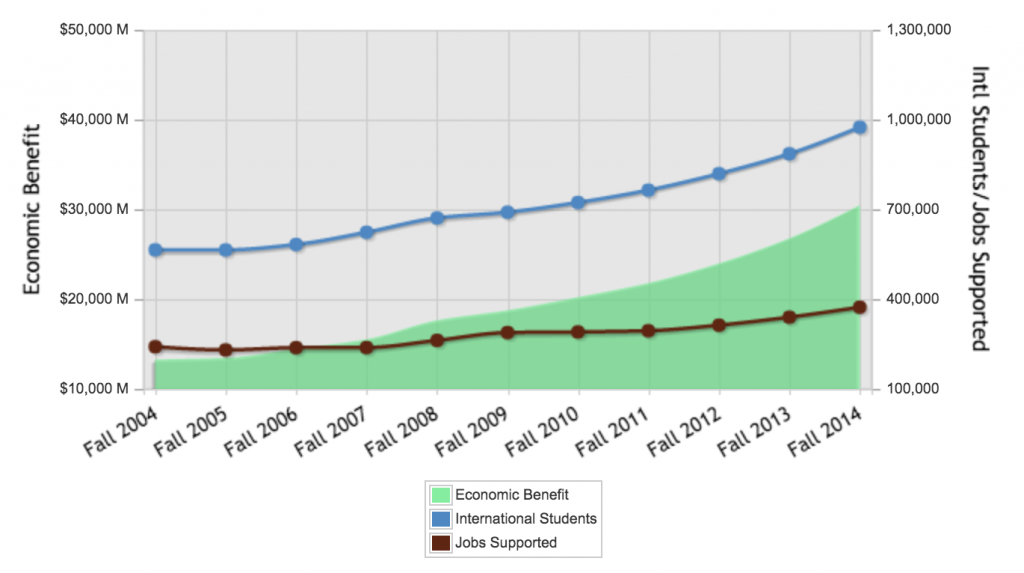 11 Responses to International student value to US is $30.5bn