While overall interest in overseas culture has risen, the “bulk of the overall rise [is] due to changes in China’s smaller cities, which in recent years have seen a faster pace of development than their larger counterparts”, the paper said.

However, the research – drawing from several sources including Chinese social media, online surveys and focus groups – also found that preferred overseas countries in terms of culture has shifted away from Anglophone countries to those in Asia and Europe.

Japan, France and Germany have all seen a rise in popularity in terms of culture, as well as locations for study.

“The research shows that Chinese students were somewhat more interested in studying in European countries compared to previous years, but interest in these countries is still well behind the UK, US and Japan,” Jazreel Goh, director of British Council Malaysia and co-author of the report told The PIE.

Despite the growing interests in European countries the “UK, US and Japan are still ahead”, she explained, adding that Japan has “always been a strong study destination for Chinese students”.

“When we look ahead to the post-pandemic era, this research should serve as a reminder that immersive cultural experiences remain central to overseas study,” Matt Durnin, global head of Insights and Consultancy at British Council, added. 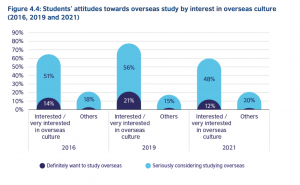 Previous research published in 2017 found that US was “by far the most preferred country” regarding culture, and later research in 2019 indicated the UK had taken over as the most-preferred country – a position the country has maintained.

“More recently, research in early 2021 showed that all Anglophone countries have fallen in popularity, with Asian countries (particularly Japan) and European countries becoming more likely to be named as people’s favourite overseas country in terms of culture,” the latest report read.

Rising Sino-US tensions during the previous US administration was “the most obvious reason for the change in perceptions of the US”, the report said, but even after Donald Trump left office, the research suggested that “simply changing the president is not enough to make attitudes change back”. 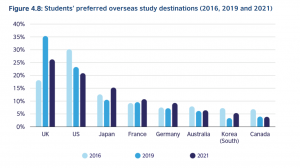 US and UK handling of the pandemic could also have led to a decline in the number of Chinese people rating them as their preferred overseas culture, it added.

Interest in overseas study is sharply lower in 2021 among the general student population in China, compared to prior to the Covid-19 pandemic.

“It’s important to understand that this was a survey of the general Chinese population looking at a broad initial level of interest in studying abroad,” Goh added.

Among all respondents only 26% said they were seriously considering overseas study, while the proportion saying they “definitely want to” study overseas has fallen from 18% in 2019 to 10%.

“Despite the challenges that Chinese students have faced since the start of 2020, we still see strong interest in studying abroad, as evidenced by our survey findings and recent UK university application data,” Durnin added.  Some 78% of Chinese students who saw the UK as having the most attractive culture said the country was their first-choice study destination

The UK’s recent gains may be reversible, the report found, as shown in the “sharp swing” away from the US in terms of cultural attractiveness and study interest between 2016 and 2019.

“Improvements in US-China relations or a decline in the UK-China relationship could cause a similarly rapid shift in the opposite direction, showing that UK universities should avoid relying too heavily on students from China,” it added.

Additionally, the improving quality of domestic Chinese higher education – where the Chinese government is investing large amounts of money – is also a concern for UK universities.

“A lot of the students who described themselves as ‘very/ somewhat interested in studying overseas’ will eventually decide not to actually go abroad in practice,” Goh added.

“One of the big reasons for this gap is the cost, and smaller cities are still generally a lot less wealthy than Tier 1 and Tier 2 cities – which means there will probably be a bigger drop-off between initial interest and actually going abroad compared to China’s major cities.”

The report added that cultural interest is one important factor in Chinese students’ decisions, but that it is “far less” important than quality of education.

“The road to deciding on final destination to studying abroad can be long, and factors that affect interest in any particular country an early stage in a student’s decision-making process can make them more or less likely to choose the country later on,” Goh told The PIE News.

“A long term commitment to engaging, promoting and raising awareness of UK education and cultural offers will ensure that awareness and the level of interests in the UK remains high.”