The issue of contract cheating has been exacerbated by the Covid-19 crisis, as the booming essay mill industry set its sights on vulnerable students who may have had insufficient access to learning materials when their institutions shifted online, according to key stakeholders.

But there has also been a rise in the number of institutions taking measures to tackle the issue and maintain academic integrity, with the International Center for Academic Integrity registering a significant increase in institutions registering to take part in its global day of action, in comparison with 2019 numbers.

However, what is a global phenomenon is being tackled with varying levels of intent at a national level, with Australia’s TEQSA the latest national agency to have launched an academic integrity toolkit.

“The International Day of Action against Contract Cheating [on October 21] is really important as it’s a chance for both students and staff to speak out against the essay industry and for academic integrity,” Senior Teaching fellow at Imperial College London, Thomas Lancaster, told The PIE News.

“We’ve been running this event for five years now. The fifth event is rather different to the event as we’re also operating under Covid-19, which limits what organisations around the world can do on campus.”

However, Lancaster added, “this year the event is more important than ever”.

Academic manager for Student Experience at the UK’s Coventry University, Irene Glendinning, likened the situation to a game of Whack-a-Mole.

“You close down one provider in one place and they just pop up somewhere else – that can be anywhere in the world,” she told The PIE.

The international day of action features a 20-hour virtual marathon of “conversations” around various aspects of contract cheating and academic integrity.

“We’ve had a massive increase in the number of institutions that have signed up to be part of the event,” said Glendinning, explaining that the number of registrations had risen from 94 institutions in 2019 to more than 280 for this year’s event.

“I suspect one of the reasons is that more people are beginning to wake up to the idea that cheating is real. We know that contract cheating companies, during the lockdown, were targeting our students.

“But it’s not one institution or the UK or even just Anglophone countries. This is a global phenomenon.“

An interactive map of registered participants for the IDOA event on the ICAI website revealed large numbers in North America, Europe and Australia, but very few from Asia, South America and Africa.

“That is a concern because we know contract cheating is a problem everywhere,” Glendinning continued. “But we are aware that some of the channels that we use for communicating our message – such as YouTube – are not accessible in China, for example.”

One of the main goals of the ICAI is to raise global awareness in academics, university leaders and the general public of the problem of contract cheating, but also to highlight the importance of having appropriate legislation in place to combat it.

In 2018, a BBC investigation uncovered more than 250 prominent YouTube stars who were actively encouraging students across the globe to purchase coursework from an ‘essay mill’ based in Ukraine.

And today the market is showing no signs of slowing down, with contract cheating comparison websites now widely available, providers sending students Covid-19 discounts and “being more active than ever encouraging them to cheat”.

In Australia, the Tertiary Education Quality and Standards Agency’s new Academic Integrity Toolkit was launched on October 13, which includes a guide to substantiating when contract cheating occurs, benchmarking tools, advice on policy and case studies from Australian higher education providers.

The toolkit was developed with AUD$150,000 in funding from the Australian government following a series of workshops in late 2019. 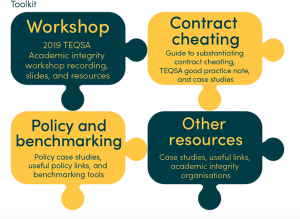 Speaking during the launch event, TEQSA chief commissioner Nick Saunders noted the toolkit was a key part of TEQSA’s ongoing approach to engaging with the sector.

Similarly in Ireland in 2019, a new provision was included in the Qualifications and Quality Assurance (Education and Training) (Amendment) Act 2019 which specifically empowers QQI to prosecute those who facilitate academic cheating.

In addition, QQI convened a National Academic Integrity Network comprising of members from across the higher education sector.

“We have a lot of anecdotal information about the problem in Ireland, but we didn’t have cold, hard facts,” Deirdre Stritch, Approval and Monitoring manager at QQI told The PIE.

“We wanted to come to a position where we could have much more targeted and effective interventions and that was easily achieved when you have a better handle on the scale.”

However, while steps have been taken in Australia, Ireland and New Zealand to combat contract cheating, essay mills remain a legitimate business in the UK.

“One of the things that we would like to do in the UK is to try to get the government to introduce legislation,” said Glendinning.

“These are legitimate companies, quite undesirable, but they’re not doing anything illegal in the UK as it stands at the moment.”

However, head of policy and communications at Quality Assurance Agency for Higher Education, Gareth Crossman, said while they are in favour of UK legislation, it’s important that an appropriate model is developed.

“The model that’s been adopted in Australia meets a basic ‘strict liability’ offence – which places the ‘intent’ onto the providers – and so we’re keen to encourage that model as being one that should be adopted by UK government.”

While essay mills are one of the most prolific methods of contract cheating, Glendinning points out that it’s important for students to understand that enlisting a family member, classmate or a friend to complete their coursework is another form of it.

“We want to make students aware of the danger of simply purchasing assignments and to make learners aware of the range of facilities available to them within their own institutions, and more broadly, when they need additional support,” she added.