A university’s website is the primary, and often exclusive, source of information for so-called ‘stealth applicants’, new data from UniQuest has found.

In 2018, 91% of the international offer holders among Uniquest partner institutions were stealth applicants

“The university website wasn’t just the most important channel, it was the only channel used”

The first dataset, released last year, found that among UQ’s partner universities, 85% of students in the 2016/2017 academic year had applied without making any contact before application.

New statistics now show an increase in 2018: 91% of the international offer holders among partner institutions were stealth applicants.

Tracing the path stealth students took before sneaking up on admissions teams in September 2018, UniQuest found that they employed a range of channels to gather information, but the most important one is overwhelmingly the university’s own website.

“We already knew from monitoring the data at offer holder stage that the university website was the most important information source for international stealth applicants,” Jennifer Parsons, UniQuest’s director of marketing and insights, told The PIE News.

“What surprised us in doing a deeper analysis of the combination of research channels for those students who went on to enrol, is that for a staggering 50% of enrolled students, the university website wasn’t just the most important channel, it was the only channel used.” 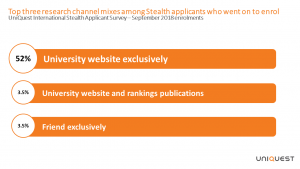 While the institution’s website was the exclusive channel for more than half of the students surveyed, other respondent reported using a mix of channels.

The next most common mixes of information sources were the ‘university website’ coupled with ‘rankings publications’, which roughly 3% of enrolled respondents used, while 3% of respondents reported relying on their friends exclusively as their source of information.

Social media channels were not represented significantly in the responses. They were only part of the channel mix in the path to applications “for only a handful of students who went to enrol,” Uniquest reported.

Parsons explained the website may be the one and only chance universities have to engage this type of students in some cases.

“Students are relying on University website as their one-stop-shop to learn about a university,” she said.

“Universities need to make sure the content on their websites is up-to-date and enables students to get the information they need to see themselves becoming a student at the university. Students aren’t going to reach out to fill in any gaps.”

The research into stealth applicant behaviour is ongoing, aiming at providing institutions with the tools to better reach out to and engage these prospective students.

“Through this research and our broader student journey insights, we’ve built a robust profile of who ‘stealth students’ are, common questions they have, and how best to engage them once they’ve submitted their application,” UniQuest co-founder and CEO Rachel Fletcher told The PIE.

“We’re now working with our partners to help them translate these insights into developing the right messages and information for their websites to make sure Stealth students are engaged in the right way on the channel they’re relying on most pre-application.”