IDP Education has reported a 50% year-on-year revenue increase on last year, reaching a record total $793 million for the 2022 final year.

The company’s financial results showed that adjusted earnings before interest and taxes were up 127% reaching $163m and net profits after tax up 137% to $106.6m.

The record revenue and EBIT reflect the “strength of IDP’s business strategy and the resilience of the industry” the company said. All major sections of the business saw increase, apart from English Language Teaching which was down 6% in FY22. In 2021, total revenue declined by 9.9%.

IDP’s drawn borrowing balance of $156.5m on June 30 is an increase of $100m on the closing balance on last year, which it says is primarily to the acquisition of the IELTs business in India.

Students were placed into a record 55,400 courses in 2022, up 45% from last year, with the company pointing to strong demand for all major destinations.

Growth from student source markets was driven by India, which made up 53% of the placed students – up by 78% on last year. China however fared less well, marking a decline by 21%. 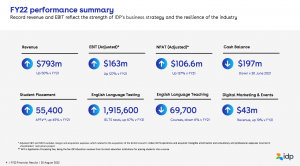 “Student placement average price increased by 1% on a constant currency basis with increases in client commission rates partially offset by a reduction in student charging revenue,” it said.

Test taker volumes also demonstrated “strong structural growth”, IDP noted, with the record 1.92 million tests supported by the “consolidation” of the Indian market. In July 2021, the British Council revealed it would sell its IELTS business in India to IDP for £130m. 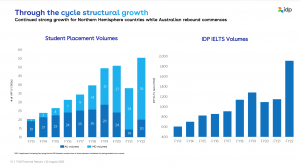 The document noted a “strong rebound in IELTS revenue (+57%) with volumes returning to pre pandemic levels for most counties”, while the British Council deal offered additional growth with gained Indian volumes from 1 August 2021. 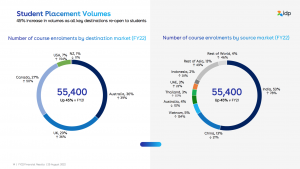 “Importantly, we strengthened our relationships with our customers, evidenced by a four-point increase in our global Net Promoter Score across the year,” Barkla added.

“In addition to expanding our IELTS and student placement office network in key growth markets, we also delivered new data-driven study application services that will move our industry forward.”

The company says it continues to evolve from a physical office network to global omni-channel industry transformer, with the document elaborating on IDP’s FastLane service.

The service is seeking to digitally transform the industry, IDP contends, and attracted 61 clients across Australia and UK as of June 30 and five clients in Canada shortly after launch.

IDP points to student facing success with more than 900,000 downloads of the IDP Live app as of August 23, with 3,000 students receiving formal offers through FastLane in FY22.

Clients deliver an average application to offer turnaround time that is six times faster than normal, IDP added. It is aiming to grow formal offers in FY23 by at least three times and expand further into undergraduate programs.

The report also noted that increased overheads “reflect the investment being [made] across the business following a period of disciplined cost controls”.

A 34% rise in overheads was down to broad-based hiring and network expansion, it said.

Employee cost grew by 31%, marketing spend increased by 66% and occupancy costs by 14% due “primarily to the investment in additional student placement offices (+29 v FY21) and expansion of CD IELTS computer lab network (+101 computer labs in FY21)”. It opened its first offices in West Africa in the past year.