A highlight of the annual language travel calendar, IALC’s 2019 Seville Workshop was one of the largest in the organisation’s history, welcoming representatives of more than 100 schools, 121 agencies and 20 exhibitors to the lively and historic capital of Spain’s Andalusia region.

Hosted by CLIC Seville, the workshop boasted a “record-breaking” attendance of owner-operators of IALC language centres and study travel agencies from across the globe for three days of meetings and discussions around trends in the sector.

For many attendees, the focus was on forming new partnerships, while for others, the workshop provided ample opportunity to reconnect with old friends and business partners.

“As a small school, this [workshop] gives us a huge advantage because we don’t have a big marketing budget,” director of Pace Language Institute, Evin Delaney, told The PIE News.

“It’s an opportunity to meet lots of quality agents from further afield – such as South America, Japan or Korea where we wouldn’t have travelled to – under one roof, as well as the people we work with all year around.

“And, because it is such a welcoming, family atmosphere, there are a lot of friendships built up over the years.”

Netherlands-based education advisor Veronique Jurgens of Bureau Weg-Wijs agreed: “The IALC workshop is especially important because it allows us to connect with those schools we cannot visit, such as Australia.

“And we know all IALC schools are good ones – we know they are the crème de la crème,” she told The PIE.

Jurgens explained that Dutch students’ hunger for international study has continued to rise, particularly the market for a gap year abroad.

And Spain has become particularly attractive to Dutch students looking to study internationally.

“The number of students that we see from China is growing, but right now in Valencia, there are a lot of students from Holland, because the city is beautiful and it is very trendy to go there,” explained Fernando Batalla of Taronja Spanish School.

“Right now in Valencia, there are a lot of students from Holland”

Marketing manager at CLIC International House Frederic Parrilla added that while the majority of students attending CLIC schools in Seville, Cadiz and Malaga come from the US, Germany and Switzerland, there had been a noticeable increase in interest from Japanese and Korean students.

“We are seeing more and more Japanese students because they are very attracted to what Seville has to offer, and all the myth of flamenco. They have such an interest in Spanish,” he told The PIE.

“And also Korean students – they love to be in a city that is not too big or small. Seville has less than one million people, and the cost of living and quality of life is good.”

Meanwhile, founder and CEO of Touraine-based language travel agency International-sur-Loire Britta Vincent said that one trend she has seen in France is an increase in students looking to Ireland instead of the UK for an English language study experience.

“Brexit is worrying the French people, and due to the uncertainty that surrounds it, it is difficult for an agent or school to give correct advice,” she noted. 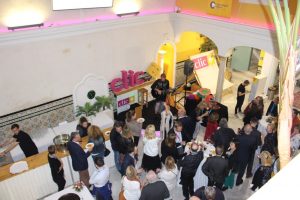 The 2019 Workshop was hosted by CLIC Seville

“So people probably feel more secure going to Ireland – we are almost afraid that too many are going there so we try to find a balance between Ireland and other countries.”

In addition to playing host to agent and educator meetings, the workshop’s busy evening social program took in some of the most historic sights in the city, as well as a visit to the family-run Spanish language school and workshop host CLIC Seville.

“We wanted to host this event for many years,”  Parrilla told The PIE.

“Seville is one of those places where you can really see all you would expect from Spain – the climate, the warmth of the people and it’s not a coastal area overrun by tourism.”

During the final evening Gala dinner held at the Hacienda el Vizir, IALC president Giorgia Biccelli described the 2019 workshop as “more than anything expected”.

“We are extremely proud of our longstanding relationships with our partners, it has been a wonderful workshop, and thank you for a record-breaking attendance,” she added.

The IALC Workshop 2020 will be hosted by Languages International in Auckland, New Zealand.

See a gallery of photos from the IALC 2019 Workshop here