The chief executive of an online student recruitment platform has received an award for her work strengthening India-Australia relationships.

The timing “could not be better” given the recent free trade and economic deal agreed between Australia and India.

Elaine Starkey, CEO and co-founder of Global Study Partners, won the Businesswoman of the Year Award at the 2022 India Australia Business & Community Alliance awards in Sydney on April 29.

The IABCA is a network focused on developing relationships between India and Australia.

Starkey told The PIE News that she was “surprised, thrilled and honoured” to win the award and that GSP – which currently runs seven offices in India –plans to “double in size” in the country by the end of this year. 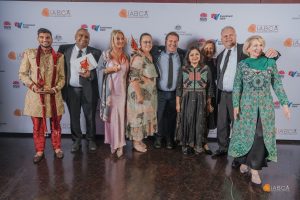 Starkey said the timing “could not be better” given the free trade and economic deal agreed between Australia and India on April 2.

The agreement will facilitate the recognition of qualifications between the two countries and extend the length of post-study stay permitted for Indian STEM and ICT students in Australia.

“The recognition of Australian qualifications and of blended, online and joint degrees will support sustainable growth of Australia’s higher education services in India,” Starkey said.

“One of the keys to success when accelerating a business is timing and I can’t see that there has ever been a better time or relationship to build our educational ties between our countries.

“I am excited about what the future holds between our two great nations.”

The award was presented by Peter Varghese, retired Australian diplomat and chancellor of the University of Queensland.

Globally, GSP now has over 1,200 recruitment partners and works in 22 countries including India, Nepal and Vietnam.

“Personally, I feel that a team leader is nothing without the strong team behind them,” Starkey said, “and this award goes to each and every one of the GSP team for their hard work, resilience, passion and genius.”

One Response to GSP CEO wins award for India-Aus links