Financial and institutional growth was seen much more in regions such as Asia, Sub-Saharan Africa and Latin America over the course of last two decades than in the Global North, according to a new report focusing on investment and development in global higher education.

Higher Education Strategy Associates has accumulated data on many different aspects of higher education around the world, in a report that is one of the most comprehensive and far reaching of its kind.

“You can’t find this [sort of comparison] for the developing world – yet that’s where the policy help is really needed,” Alex Usher, HESA’s founder and CEO, told The PIE News.

“Categorisation is different everywhere, and it’s just tricky to compare; we’ve done our best, and I think it allows people to understand these systems a lot better,” he continued.

Key findings of the extensive report included the stagnation of student enrolments in the Global North – where some “golden years” for the Global South appeared as the two regions went on their separate paths.

“It was surprising how widespread the slowdown was after 2012 and 2013, in terms of public spending on higher as a percentage of GDP,” Usher explained. “There’s definitely some golden years in the middle of the late noughties where the South is catching up and getting richer faster than the North was.”

The South, however, wasn’t always playing catch-up – and at one point, stagnated almost as badly as the North.

“Categorisation is different everywhere, and it’s just tricky to compare”

“They were also increasing the percentage of their economies dedicated to higher education in leaps and bounds – it was 10% every year, for six or seven years – that’s huge.

“And then it just essentially plateaued and they went into the same mode as the North, which was ‘we’re going to grow at the same size of GDP – we’re not going to increase higher education anymore’,” Usher said. 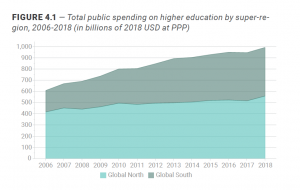 Another surprising finding Usher points to is that of the question on private versus public funding.

Private funding for HE, the report says, grew “about three times more quickly than public funding” from 2012-18. The Global South, while easing off financially in that period, “exploded” due to China’s involvement in the late 2000s and early 2010s.

In the Global North, however, growth in per-student private funding resumed after 2012 – remaining stagnant in the Global South.

“Looking at the public money per-student in the Global South, it’s going down more recently because they can’t keep up with demand – and so you’re getting institutional budgets where there’s more money in the system, but there’s a lot more students and things are stretched. I wonder how much longer they can go without private funding, and I think that will be an interesting question,” Usher explained.

In the Global North, public funding was essentially stagnant for nearly a decade up to 2018.

In addition to the report on global higher ed, HESA also created a raft of profiles pertaining to data from each country – as many as data could be collected from, which yielded other interesting points for the sector to examine over the next few years.

“Going back to why the report was made, it’s all about who really needs this information.

“In certain countries, the classification and education measurements of institutions vary”

“In certain countries, the classification and education measurements of institutions vary – take Ireland, for example, which is tricky because the system is difficult to compare to others,” he said.

“Especially in the Global North, everybody may look the same on the surface, but actually, they’re really different, and that’s what this report aims to do. In the South, it’s more about gaining a nuanced understanding in the first place, this hasn’t been done before,” Usher continued.

Those country differences also feature in the report’s general findings about tuition fees.

Sweden’s profile, for example, shows data that they moved to charge “significant” international student fees for students from outside the EU, but when the data is examined, the fees are not as high compared to other countries because it is “offset by subsidies”.

Usher noted, however, that international students play a bigger role in some areas than in others. 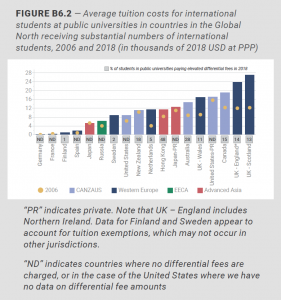 “It’s only really Anglophone countries, like Canada, New Zealand, Australia and so on where international students are seen as a significant money-maker,” Usher said.

He does, however, touch on the fact that there is opportunities missed in other areas.

“Some others could probably get some international students to fills those needs of gaps in domestic students – they’re capable of it.