Germany has held on to the top spot as the most attractive European country for international students, the 2018 edition of the Study.EU Country Ranking has revealed. Germany’s combination of world-class higher education institutions and a tuition-free public university system made it the first choice for many students ahead of the UK and France.

Drawing from university ranking data, governmental and university organisation statistics, Study.EU ranked 30 European countries across three dimensions: Education (45%), measuring the quality of education; Cost (30%), assessing what students should expect to pay for living and tuition; and Life & Career (25%), evaluating the quality of life and the chances of staying and working in the country after graduation.

“Based on those statistics, most of the countries in our European ranking are safer than the US”

The popularity of Germany as the top study abroad destination for the second year running was of little surprise, having surpassed its long-term goal of hosting 350,000 international students by 2020 three years early in 2017.

Study.EU CEO Gerrit Bruno Blöss told The PIE News that Germany’s combination of high-quality education with near-zero tuition fees make it a “no-brainer” for many international students, particularly with a growing number of English-taught programs.

The UK came in second, taking the top spot for “Education”, and for “Life & Career” but ranking 30th for “Cost” due to high living expenses and tuition fees.

France, with its highly reputed but affordable higher education system, moved up ahead of the Netherlands to take third place, and Russia rounded off the top five.

Poland was the only new entrant into the 2018 edition’s top 10, having consistently increased the availability of English-taught study options and growing its international student population from just 12,000 to over 65,000 in the past 10 years. 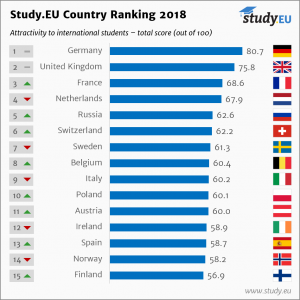 The 2018 edition also took into account personal safety as a factor in the “Life & Career” category.

“We have noticed that students are increasingly concerned with the safety in their host countries,” said Blöss.

The score for personal safety is based on analyses in the Social Progress Index and includes homicide rates, rates of other violent crimes and incidents of political terror.

“Based on those statistics, most of the countries in our European ranking are safer than, for example, the United States,” Blöss added.

The full ranking of all 30 countries can be seen here.