Founded in 1989 by Tony Binns, Our World English Schools benefits from association with host schools where it runs its summer programs, such as Dulwich College in London and Wycombe Abbey in Buckinghamshire.

Around 1,000 juniors aged eight to 17 from over 50 nationalities enrol each summer, on programs which include IELTS preparation, soccer with the Chelsea FC Foundation and a Global Young Leaders’ courses in debating and critical thinking.

“Despite the uncertainty of Brexit, the UK ELT sector offers high-quality teaching and learning experiences that are valued by the world,” Wang said.

“The successful purchase of Studio Cambridge last year has given us confidence for further investment in the UK. Our World English Schools is another good example of a solid business with an outstanding reputation and a hugely experienced team,” he added. 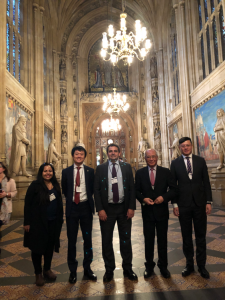 To mark the acquisition, a celebratory dinner was held in the UK’s Houses of Parliament, attended by MP of Cumbria Trudy Harrison and the former secretary for Education in Hong Kong Eddie Ng among other guests.

Speaking about the acquisition, Binns said he “could not think of a safer pair of hands” than Full Circle.

“Indeed, we see this as a beginning rather than a conclusion,” he said.

“There are many ways in which the already strong Our World brand can benefit from being part of a bigger organisation, and the ethos which is so palpable in Full Circle through Danny Wang and his team aligns perfectly with our own, the emphasis being on education rather than business.”

One Response to Full Circle buys Our World English Schools