You are here: Home » News » French HE is in urgent need of a TNE strategy – France Stratégie

French higher education institutions are active overseas but a lack of national and institutional strategies means the country’s transnational education lags behind the UK, US and Australia, a government-sponsored think tank has said.

French institutions offer 600 programmes overseas, teaching some 37,000 students, according to a report published by France Stratégie, a planning agency attached to the Office of the Prime Minister, and presented to the ministers of foreign affairs and international development, and of higher education and research.

However, these figures are considerably compared to some other countries, the report finds. Some 111,000 students are enrolled on Australian TNE programmes, and more than 200,000 in UK TNE.

The report – French Higher Education Across Borders: The Urgent Need for a Strategy – describes the TNE currently offered by French HEIs as a “niche offer”. Almost 70% of degrees awarded are at postgraduate level, and in specialised fields in which France has a reputation for excellence, such as hospitality and fashion.

Student enrolments at French TNE centres also tend to be much lower than on British and Australian offshore campuses, averaging just over 200 enrolments. 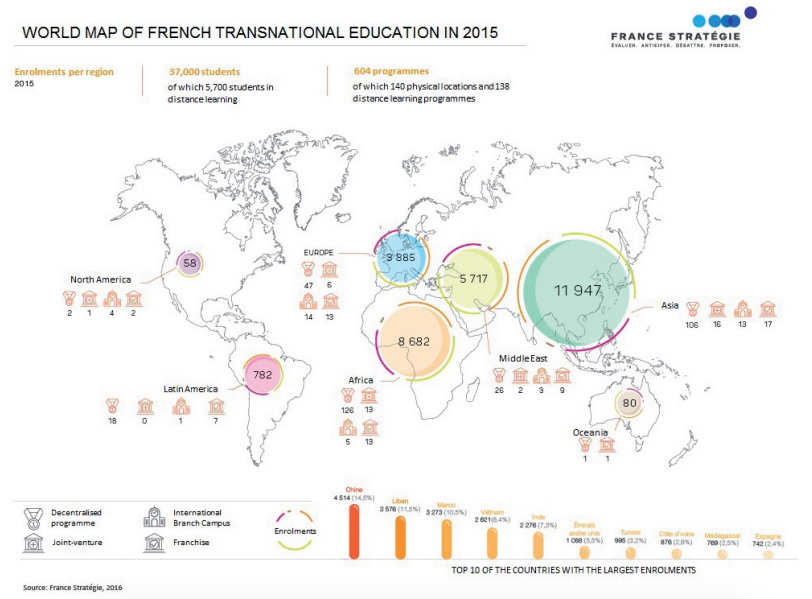 And it is not just physical overseas campuses where France is lagging behind, but also in distance learning, the report argues.

This is despite €8m in government funding for online courses that was allocated in 2014 to enable France to catch up with other countries investing in MOOCs.

However, this lack of direction and investment is not as a result of a conscious decision made at the state or institutional level, the report contends.

“Our institutions’ ‘halfway’ position is mainly due to the absence of any stable or clearly stated strategy, with decisions on deployment tending to be largely opportunistic,” the report states.

Morocco, Vietnam, China, Lebanon and Tunisia are the most popular areas of focus, and the majority of courses – 69% are partly or wholly delivered in French.

But the report notes that TNE activity generally originates with faculty, rather than being the result of “genuine, clearly articulated strategies”.

“There is a marked underinvestment in internationalisation schemes mobilising digital technologies”

Because of this lack of strategic thinking and investment, French institutions are missing out on opportunities to expand their TNE programming due to insufficient resources and their management not considering international issues a priority, the report states.

It argues that creating a national strategy to expand TNE activities in France’s higher education sector will have a positive effect on French trade and diplomatic ties overseas.

It therefore outlines three national objectives: equipping institutions with the tools to manage international strategies, including statistical tools to gather data and bolstering human resources at the institutional level; ensuring strong oversight and quality assurance of French overseas programmes; and offering more financial support, both by clarifying the funding currently available and relaxing regulations on things like fees.

“Although it is not up to government supervisors to dictate what HEIs’ strategies should be… it is a state obligation to map out clear positioning on all essential matters of regulation: on financing, management and assessment,” it says, nodding to a national brand image and data to help develop those strategies.

The government is also responsible for “improving the quality assurance systems to match them to the new issues involved in institutions’ transnational activities”, it adds.

One approach that could help TNE to proliferate is to use diplomatic links to develop cooperation in areas “where institutions are not going to spontaneously establish themselves and yet look promising”, such as Ethiopia, Indonesia, Nigeria and the Philippines, the report suggests.

Another is targeting areas where there is already cutting-edge research – such as by partnering with leading universities in Asia.

Alternatively, HEIs could focus more heavily on distance learning, either by developing MOOCs or by creating a virtual university modelled on the Open University, it suggests.

“Our situation is not irreversible,” it urges.

“It is therefore a matter of urgency that we comprehend the importance of this transnational turning-point in higher education and take up a clear position in order to construct a proactive strategy.”