The increasing prominence of digital learning among language students was evident at the Eaquals conference in Lisbon last week, as the accreditation body moves towards introducing new inspections to language learning delivered online.

This year’s Eaquals conference was the biggest there has been, with over 270 delegates

The event marked the 25th anniversary for Eaquals as well as the appointment of its new chairman, Justin Quinn.

Executive director, Sarah Aitken, said the accreditation body is now ready to roll out updates to its accreditation scheme which are necessary to incorporate the growing use of blended learning.

“We’ve in the last two years revised our quality standards to see whether they fit in the classroom model that isn’t necessarily a classroom,” she told The PIE News.

School inspectors have also been trained in this new method of accreditation.

“It required the background work of working out what quality looks like in that area,” said Aitken, adding that the quality standard of having, for example, “competent teachers” and “competent lessons” demonstrates no difference compared to classroom teaching. 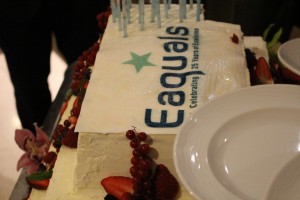 Eaquals marked its 25th anniversary at the event. Photo: The PIE News

“So it’s actually more about if the teacher’s using these tools well or even teaching online, what should we be looking for,” she explained.

“They also have these skills for 21st century teachers and they’re finding this framework very useful,” she said.

NILE Online, a specialist teacher development institute, has also formally aligned its online courses to the framework this month.

Held in the centre of Lisbon, this year’s Eaquals conference was record breaking with over 270 delegates.

The Portuguese Minister of Foreign Affairs, Augusto Santos Silva, officially opened the event and paid tribute to the association’s 25 years of operation.

“This is very important work to raise the standards of assessment, of our teaching of languages, and doing so in an international and European dimension,” he told delegates.

The Portuguese language, he said, is the most spoken in the southern hemisphere, and is the native language of around 250 million people worldwide.

“What is the main instrument to promote people to people communication is mutual understanding,” the Minister said.

“There’s more people coming in at the third level, and they’re seeing what Eaquals can do for their brand,” said Justin Quinn, the newly-appointed chairman.

Quinn is also managing director of the Centre of English Studies, which has schools in the UK and Ireland. He was inaugurated as chairman of the association at the conference, following a year as chairman-elect, taking over from Richard Rossner, who has been chair since 2014.

“For an organisation to grow we’ve got to think of strategy, what direction we’re going to go, and I think the values and culture in Eaquals are similar to my culture,” he said.

“I really just hope I can assist and hope and push that brand out there. The vision for me is that more people know what Eaquals is and who we are.”

Last reply was April 26, 2016
Disclaimer: All user contributions posted on this site are those of the user ONLY and NOT those of The PIE Ltd or its associated trademarks, websites and services. The PIE Ltd does not necessarily endorse, support, sanction, encourage, verify or agree with any comments, opinions or statements or other content provided by users.