Demand for graduate management education has stabilised when compared with 2017, according to a report from the Graduate Management Admission Council. However, while applications to business school programs in the Asia-Pacific, European, and Canadian markets are up on 2017,  programs in the US report a dip in volume.

The US experienced a 10.5% drop in international volume across all program types

Conducted from early-June to mid-July 2018, GMAC’s Application Trends Survey findings are based on responses from 1,087 graduate business programs at 363 universities worldwide.

“Demand for graduate management education is stable year over year”

Programs in Asia-Pacific were found to have had an 8.9% increase, Canada realised 7.7% growth, and Europe had a 3.2% increase in application demand across all program types.

Meanwhile, the US experienced a nearly 7% decline, including a 10.5% drop in international volume across all program types. 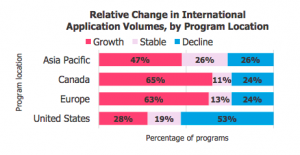 Applications to business school programs in the Asia-Pacific, European, and Canadian markets are up over 2017 while programs in the US report a drop in volume. Image: GMAC

Growth in the Canadian and European regions was explained by the report authors to have derived largely from increases in international applications, while domestic growth is fuelling increases in Asia-Pacific.

Regionally, strong growth in application volume across all program types was offset by declines in the US.

“However, there are significant regional variations. Non-US programs continue to thrive, highlighting the continued emergence of enhanced educational and professional opportunities outside the US.”

“A low unemployment rate means young professionals have an increased opportunity cost of leaving their jobs in pursuit of an advanced degree.

“Combined with a disruptive American political environment and the emergence over the past decade of tremendous educational and professional opportunities abroad, one can begin to understand in part why demand in the US has dropped from previously record-high application volumes at some schools.”

The ability to attract top international talent continues to be a critical determinant to programs’ overall application volumes, the report continued.

This year, 65% of Canadian programs and 63% of European programs report an increase in international applications over 2017.

While nearly half of Asia-Pacific programs received more international applications this year than in 2017 (47%), the report pointed out that their strong overall application volumes are driven primarily by domestic demand, which accounts for the majority of their applications (59%).

“Students are asking, “why would I move halfway across the world… if I won’t have the opportunity to work?”

Meanwhile, most programs in the US report declining demand as international students continue to identify attractive educational and professional opportunities elsewhere.

In a recent conversation with The PIE News, Chowfla explained that demographic and economic trends have slowly pulled some of the application volumes away from US schools.

“If you look at the growth rate of economics in Asia, they are significant, and as a result, there is the creation of significant corporations and job opportunities,” he said.

“Students are asking themselves, “why would I move halfway across the world [to the US], take a loan in my home currency and pay a high tuition fee if I will not have the opportunity to work in that country?”

“Higher education isn’t only about earning skills and knowledge, it is also about the type of career you want to build and the immigration status you want to have,” he added.