With English language testing suspended in China since February and cancellations being announced on a month-by-month basis, hundreds of thousands of students are currently trying to secure English language qualifications that will allow them to attend universities abroad.

TOEFL will offer weekly tests from May 30

“Percentage-wise for the autumn 2020 intake, currently over 70% of our students are affected and cannot get test results for the time being,” said Amanda Wang of myOffer, which helps Chinese students apply for universities in the UK and Australia.

“We talk to universities quite a lot to see if there is any update and whether or not they accept other language tests.”

Top tests such as IELTS and TOEFL have faced unique challenges in the Chinese market. Although they have been able to roll out online at-home tests in many countries around the world, for reasons that are unclear no at-home tests have yet been approved for use in China.

“IELTS Indicator is not available in Mainland China, as it is not yet sanctioned by the national exams regulator,” explained Jazreel Goh of the British Council, which conducts IELTS testing.

“However, we are in discussions with them to see what alternatives can be offered to test takers.”

Yet with a widening of the tests universities are accepting and the roll out of China-specific versions, there is hope that more students will be able to do tests in the coming months. 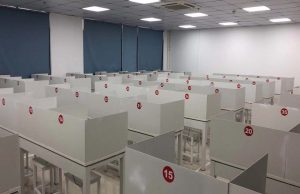 On May 15 ETS, which runs TOEFL exams, rolled out the TOEFL iTP Plus for China, consisting of a pencil and paper test conducted weekly in 17 Chinese cities from May 30.

It also includes an online interview administered by video interview company Vericant, which is based in Beijing.

“There’s a big backlog because testing has for the most part not been available since February,” said Srikant Gopal, executive director of the TOEFL program at ETS.

“It’s a process of universities accepting the test and publicising information [about TOEFL ITP Plus for China]. It also works in reverse if students show interest in universities.

“This is a process that will build momentum over the next few weeks. We have had lots of registrations, but we still have lots of capacity and we have provided for a lot of capacity because we know there’s a lot of unmet demand.”

The gap in the market – even if temporary – has also created a surge of interest among students for alternative tests, particularly Pearson’s PTE and Duolingo.

“Generally speaking, IELTS is the first choice for students to study in the UK, and then the TOEFL. But at this stage Duolingo and PTE are the top choices,” said Kant Wang from the myOffer office in Shanghai.

“Duolingo particularly has become the first choice for Chinese students”

“Duolingo particularly has become the first choice for Chinese students. They can take online tests at any time and anywhere. They can finish in one hour and get results in two days. It’s accepted by over 2,000 institutions around the world.”

Despite student preference, however, Duolingo is not as widely accepted as IELTS and TOEFL.

In the UK, Wang said that over 40 universities accept the qualification but only for enrolling on pre-sessional courses.

Unlike in other countries, language requirements in the UK are decided by the Home Office, meaning it is more difficult for universities to be flexible in admissions criteria.

However, this week it was announced that the PTE test would be added to the approved list. Wang said slots have quickly been booked up.

Meeting the demand is also something ETS is aware of, with the current test a stop-gap measure until authorities announce that normal testing can resume.

“We’re only offering it until the total iBT becomes available again in the near future, whenever that is.”