Canada is the top destination of choice for one in four students, latest analysis by global education company IDP Education has found.

The US is placed second spot, with 20% of students indicating it is their preferred destination, and the UK and Australia are in joint third place, with 19%, respectively, IDP’s Emerging Futures research noted. Overall the study surveyed more than 10,000 students worldwide.

The research identified a “complex picture” of student intentions, with high quality of education, good employment opportunities after graduation and support for international students as the top three main drivers for choosing specific study destinations.

Top reasons for opting to study overseas more generally were given as career development, education quality and knowledge by the surveyed students.

“The results of this comprehensive research are clear, for competing destinations to remain competitive they must deliver a positive experience and positive outcomes for students, whilst improving the ways in which they communicate this with future students,” said Simon Emmett, CEO of IDP Connect.

“Tomorrow’s international students are motivated by the return on investment of their education,” he continued.

“The countries in which institutions, governments and, most importantly, employers can work together to develop the right offer to students and best practice in post-study employment, will benefit the most from the next generation of skilled and highly educated students, in turn fulfilling their labour market needs and the needs of their economies.”

Of the 10,000 students surveyed, 2,115 were from India and 1,985 from China, with the remaining located in Philippines, Bangladesh, Kenya, Sri Lanka, Nepal, Indonesia, Pakistan and Vietnam. Some 40% already have an offer to study in 2023.

Among Chinese respondents, the UK and US each got the nod as first-choice destination from 21%, with 18% indicating that China was their preferred destination. IDP pointed to recent policy announcements in Australia as unhelpful as the country’s universities seek to regain lost market share.

For Indian students, Australia is in fourth place with only one in 10 (11%) and is only “marginally ahead” of Canada among Chinese students. Some 10% of students from China said they had Australia as their top study destination.

Students who had not selected Australia as their top destination were also asked if the country’s late 2021 announcement increasing the length of stay for master’s graduates from two to three years would convince them to rethink their decision. Some 78% responded that they were not more inclined to consider Australia.

“Students have grown tired of waiting to return. Now Australia must reinforce a collective message around the world that it is open and welcoming students. Australia also needs to demonstrate that there are practical routes to post-graduate employment, and that international students form a valued and vital part of our communities.

“Australia has a unique offering and our institutions have continued to innovate and put students at the centre. By forging ahead with these positives, adopting data-informed strategies and working with trusted partners on the ground, Australian institutions have a real opportunity to turn the tide,” Barkla said in a statement.

Perceptions of both the UK’s and Australia’s quality of education was higher than average when compared with other study destinations, with 72% and 70% of respondents, respectively, saying they chose the two countries as a result of their quality. 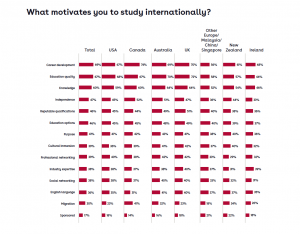 Commenting for The PIE News, director of external relations at IDP Connect, Jonah Duffin said that “perceptions of each destination appear to be driving student choice”.

“Across all large markets it is a combination of quality of education and post-study employment opportunities that are driving their selection of their first-choice destination,” he said.

Among respondents, 63% said that perceived quality of education and 52% said post-study work opportunities were the key motivational factors for selecting a particular country.

“Quality of education is particularly key for those choosing the UK and the US as their first-choice destination, with 70% and 72% respectively saying this was a reason to choose that country,” Duffin explained.

“This drops to 60% for respondents who state that Canada is their number one destination – the fact that there are good post-study work opportunities (61%), support for international students (63%) and that Canada welcomes people from other countries (60%) are also key considerations.”

Asked if students have now reverted to drivers common before the pandemic – following two years of disruption with border closures – Duffin said that could “broadly [be] a fair assessment”, pointing to the motivation to gain a return on investment for their education.

Researchers also asked what students hoped to do after graduating from higher education, with the majority (32%) indicating they would like to work in their chosen study destination.

While 19% of all respondents said they would seek permanent residency in their study destination, this rose to 30% among those choosing Canada. 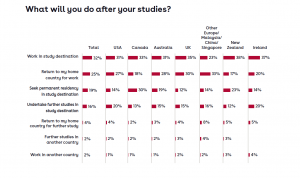 Canadian stakeholders have said that the student residency pathway “key pillar” for the country’s immigration targets. In recent years, the Trudeau administration has placed newcomers at the heart of its build back better strategy. Some 40,000 international graduates have been welcomed to stay in the country after graduation, with the former minister of Immigration Marco Mendicino saying in 2021, “we don’t just want you to study here, we want you to stay here”.

Sean Fraser, who took over the Immigration, Refugees and Citizenship Canada remit in December 2021, more recently praised the “essential role” of international students in the country.

However, beyond permanent migration there are certainly other important pull factors to Canada, Duffin told The PIE.

“When we asked what motivates respondents to study internationally, those intending to go to Canada responded that career development, education quality and knowledge were their key motivators and migration was ranked eighth on the list of motivations,” he detailed.

“This highlights that it is too simplistic to simply see Canada as a migration destination, students are looking at a range of factors and ultimately, they want to be well equipped, by a high quality education, to fulfil their career aspirations in a welcoming and supportive environment.”