The first cohort of Canada’s new outbound mobility program, the Global Skills Opportunity, has included a higher proportion of underrepresented students than organisers had hoped for when the program launched.

Jointly administered by Colleges and Institutes Canada and Universities Canada and launched in late 2021, the focus of the initiative sought to drive interest in three groups of Canadian students – Indigenous students, students with disabilities and those from low-income backgrounds.

Of the 1,200+ college and university students that have completed or are completing physical or virtual mobility as part of the first cohort, more than half have identified as underrepresented.

“Canada actually does not send many students abroad”

Overall, 55% identified as low-income, while 15% were Indigenous in addition to a further 15% who identified as students with a disability. Organisers had a target of 65% of participants representing the three focus groups.

Approximately, 70% of university participants have identified as underrepresented, organisers noted.

Universities Canada also highlighted that 78% of program activity is with non-traditional countries – countries other than UK, US, France or Australia. 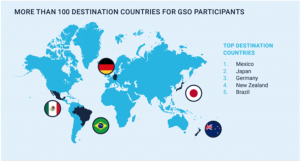 June data shows that students would go to more than 100 countries through the pilot program. Photo: Universities Canada

“Canada actually does not send many students abroad. Internationally, in fact, it’s less per capita than the US, the UK, and Australia. So part of this initiative is to increase that number,” he explained.

“We want [the GSO] to be a permanent feature of the Canadian higher education landscape, so we’re already talking with government about how to extend it,” he noted, adding the importance of providing opportunities to Indigenous students, students with physical disabilities and students from low-income backgrounds.

Up to now, 102 post-secondary institutions have received funding for 124 mobility projects. A projected 16,000 students are expected to benefit from the program by 2025.

In August, president and CEO of the Canadian Council for Aboriginal Business, Tabatha Bull – who sits on the GSO Advisory Group – wrote that, of the more than 1,000 Canadian students that had joined GSO programs as of June, nearly one fifth self-identified as Indigenous.

The overall number of participants has now reached more than 1,200 students.

Similarly Rick Hansen, founder of the Rick Hansen Foundation which has partnered with GSO, reminded earlier this year that Canada “must take advantage of all its talent” as it rebuilds after the pandemic.

“With funding from the [GSO] program, participating universities and colleges have learned more about the needs of students with disabilities and are addressing obstacles to their participation in international opportunities,” he said.

“Imagine what Canada’s bright and motivated disabled post-secondary students will achieve when they have equal access to valuable global skills — and how they will inspire others to pull out their passports, strengthen their resumes and achieve their full potential.”

We have much to learn from Indigenous societies around the 🌏

Thanks to @GSO_ECM, Indigenous and non-Indigenous students in Canada are going abroad to learn about Indigenous Peoples in Belize, Japan, Nepal and more! https://t.co/2Gr86wZGXG#GlobalSkillsCA #IndigenousPeoplesDay

“It shows that I am willing to try new experiences and that I have adaptability skills. Through the experience I can gain valuable skills around multi-cultural approaches that are used in the human services field,” she said.

Miray and Jaclyn also recently participated in McMaster University’s Developing Skilled Future Leaders in Strengthening Health and Social Systems, involving a trip to work at the Caribbean Centre for Health Systems Research and Development in Trinidad and Tobago.

“I can’t believe how much I’ve grown professionally and personally,” said Miray. “The memories made will be unforgettable and the skills I gained through Global Skills Opportunity will last a lifetime.”