Blockchain technology could hold the key to a future of secure, portable academic credentials for students – particularly relevant for cross-border mobility, experts told stakeholders last week at the annual summit of the Groningen Declaration Network.

"You are effectively saying to the individual, you mind your credentials for life"

Delegates from 24 countries met at the seventh annual summit in Paris, with a focus on three main themes; privacy, trust and learner mobility.

Andy Dowling, founder and executive chairman of Australian based Digitary, explained that blockchain technology deals very well with privacy. “[The technology is] designed for environments where nobody trusts anybody else and you need to arrive at a consensus,” he offered.

But it has its limitations. Using such technology means you put documents into the possession of the individual in the long-term, Dowling said.

“What that does is actually put the burden from the university on to the individual to mind that. You are effectively saying to the individual, you mind your credentials for life, never lose the keys.”

The rise of blockchain featured heavily in the program, with several presentations detailing the use of blockchain technology being used in recognition pilot schemes around the world.

“We have five million refugees, the most well-educated refugee population in human history who cannot verify their achievements,” she said.

“This type of tragedy can only be prevented by issuing digital credentials to people that are anchored in the block chain as a secure anchor of trust.”

She emphasised that the technology is a game changer not only in education, but also in the world of cross-border employment.

Graduates are using blockchain in a globalised world to apply for jobs abroad and instantly verify proof of education, she said.

“This is the type of world that the blockchain will enable,” she said. “It’s not saying there isn’t a way to verify records at all today… but it’s a process that is riddled with inefficiencies and difficulties that actually ends up foreclosing access and opportunity around the world.”

Neil Robinson from myeQuals was elected as new GDN president at the meeting. He told The PIE News that the GDN is a great way for organisations to come together to learn about others’ experiences.

“The most notable thing for me about it is the sense of opportunity and linking different technology with policy, with visionary aspiration, with practical reality,” he told The PIE News.

“We’re starting to get a real track record of delivering.”

He added that verification projects in Canada and India could learn from projects in other jurisdictions represented at the meeting.

“We would like to reach out to have much more in Latin America and South America and emerging economies,” Robinson explained. “Indonesia, it’s the third or fourth largest emerging economy in the world. If we want that truly global digital environment, then we need to be finding ways to reach those previously unreachable locations.”

Section chief at UNESCO’s Section of Youth, Literacy and Skills Development, Borhene Chakroun, noted that 24 countries are now involved with GDN (across 79 signatories), “but the world is much more than that,” he stated, calling for the network to ensure that it would cater for countries that are lagging behind digitally.

“We see the risk that digital credentialing might leave behind many people,” he said.

“Is it an instrument for improving equity and inclusiveness or is it a tool that will put more gaps between people?” he asked. “We see already a lot of evidence of a digital gap and a gap of inclusion in terms of digital skills.”

Frédéric Forest, from the French Ministry of Higher Education, Research and Innovation, was one of the 14 new signatories. He wanted to emphasise the “collective awareness that students’ data is an essential level of development for student mobility,” he explained.

“Through our commitment, we will be able to achieve more and be able to transform free movement of students and skilled workers into reality.” 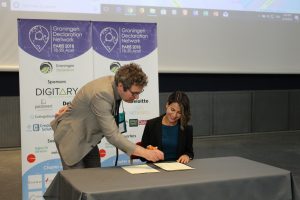 Originally 13 signatories were scheduled to sign the declaration at the event, but Herman de Leeuw GDN executive director, arranged for Miriam Chiyaba of the Zambia Qualifications Authority to also sign at the event. The total signatories now stands at 81.

One Response to Blockchain set to revolutionise academic credentials and portability