ELICOS commencement figures in Australia dropped to a 14 year low in 2020, as the sector recorded a year-on-year fall of 43.3%, according to English Australia.

Over 2020, ELICOS-only offshore visa lodgements were down by 74.6% compared with the previous year, according to the association.

Enrolment figures fell by 33.2% – 51,944 fewer students – in the month of December, while the 43.3% drop in commencements is the largest fall since the begin of the pandemic to date, English Australia noted. 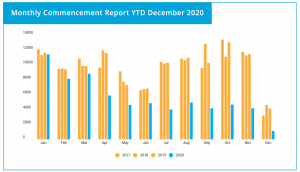 In December, providers in New South Wales saw 19,882 fewer students join classes in 2020 compared with the same month in 2019, representing a 41.9% decrease.

“In absolute student numbers, NSW experienced the biggest loss, down almost 20,000 students. However, all states and territories had declines from 38% to 54%,” English Australia noted.

“These figures do not include the declines in non-student visa holders, adding further to the impact of the past year’s border closures.”

English Australia CEO Brett Blacker highlighted that over half of the ELICOS students in December were studying online.

“Online study is not a feature traditionally of our Australian ELICOS standards and one that we had to make incredible transitions last year to be able to adapt into digital and remote learning modes,” he said.

“In that Q4 alone, to have 52% of the reported student cohort studying online is quite amazing, couple that with having 50% studying ELICOS were offshore.”

Inforum Education in Southport, QLD, has seen a 94% drop in enrolments during the pandemic, its managing director Simon Craft told ABC.

“But without the government having a plan or letting us know how and when they’re going to open the international border, we can’t plan at all,” he said.

The end of the JobKeeper government initiative to keep Australians in work and support businesses during the pandemic on March 28 will undoubtably lead to job losses, Craft indicated.

Inforum let go of half its team of 35 employees in 2020, retaining the rest on JobKeeper, he said.

“With JobKeeper wrapping up from March 28, it doesn’t leave us with much option, we’ll have to let at least another five or six staff go.”

One Response to Australia: lowest ELICOS starts in 14 years