International students unable to enter Australia are suffering from depression, anxiety and thoughts of self-harm, a new survey from the Council of International Students Australia has found.

The CISA Stranded Students Survey Preliminary Report also found that students are facing serious financial challenges – paying bills and storage for belongings in Australia despite not being able to access those services.

Now stakeholders have warned that students may be attracted to other study destinations such as Canada and the UK which also offer post-study work rights.

“Approximately 160,000 international students enrolled in an Australian institution are currently outside the country (DESE, 2021), most of which have been stranded offshore since the implementation of Australia’s border closure in March 2020,” CISA said in the report.

The survey was initiated on March 23, 2021 and within two weeks had received 107 responses from individual students. 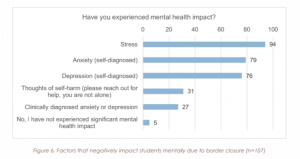 “The picture painted on [the] mental health impact was shockingly distressing. A whopping nine out of ten students reported to [have] experienced stress regarding their situation,” the report said.

“A highly concerning 30% of students have had thoughts of self-harm and one-fourth reported to exhibit clinically diagnosed anxiety or depression,” the report added.

Additional feedback from students included reports of mental trauma caused by prolonged uncertainty, losing motivation from purely theoretical teaching in degrees such as medicine and feelings of regrets and that their careers have been ruined.

“It does take a really big toll on mental health”

Students also reported being pressured to get married due to cultural reasons and give up their studies, marriage breakdown due to distance and stress, and shame and humiliation by family and friends.

“It does take a really big toll on mental health,” Mahitha Varikoti, a student of Central Queensland University, Melbourne, told The PIE News.

“I realise that friends of my age who are back in India, have actually travelled back to other countries and I’m still sitting here and listening to classes online. Given the time difference and the kind of exposure that I wanted, this is something that I would not prefer,” she added.

The majority of respondents to the report said they were experiencing financial impact, with the biggest cause being paying bills (43%) and storage for belongings (39%) without making use of the services.

Nearly half of the students reported that they were negatively affected by their rental situation, with 30% continuing to pay for rent even though they were not in the country.

Some 18% had to pay a penalty as they were forced to break their lease. Over one-third of students reported that they had taken an income hit as they lost their part-time or casual job in Australia – 8% of students said they had lost their full-time job. 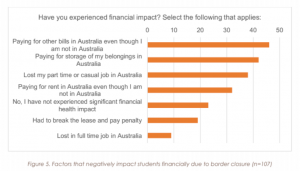 “All of my things and belongings are in Australia. I’m paying rent over there. For the first few months I paid the full amount,” Varikoti told The PIE.

“Then later, when my landlord realised my situation, he did reduce the rent. But still I am paying so that my things are not thrown out of the house or I’m not evicted. I’ve been patiently waiting from March 2020. I was under the impression that in July they were going to open. Then I thought it would be in October or November.

“This is the time when Australia literally was not showing any cases, or at least not as many cases. So there comes a saturation point where you don’t believe anymore and the government is not answering any questions that students have. They do not have any medium of communication. They do not answer. They do not give out information,” she added.

CISA’s report showed that over half of the respondents (55%) noted that they’re waiting to come back onshore to complete their courses. Some 43% of students have considered going to a different country to study. 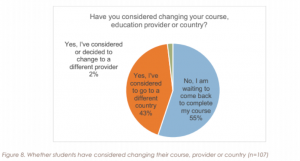 “We know that the frustration of students stranded offshore is growing – Australia started accepting visa applications in July last year with the promise that if you had a visa, offshore/online study would count towards post-study work rights,” Robert Parsonson, executive officer of ISEAA, told The PIE.

“Of course, this means nothing if they cannot get into the country to study. The Australian immigration department has still not clarified the ratio of offshore vs onshore study needed to qualify for the PSWR.

“Canada and the UK are now offering good PSWR conditions and are attracting students to switch from Australia. In particular, the UK has a one-year post-graduate study masters with PSWR opportunities that is very attractive to the Indian market,” he added.

Ravi Lochan Singh, president of the Association of Australian Education Representatives in India told The PIE that the education sector has realised that the Australian government is unlikely to welcome new international students in 2021.

“There might be some returns of the stranded students but prospective students have certainly opened up to consider other education destinations that are open and accepting travellers such as Canada and UK,” he said.

Lochan Singh did note that nothing is certain due to the unpredictable nature of the pandemic.

“India is currently experiencing an aggressive second wave of the infections and most cities are entering a phase of lockdowns. School leaving and university exams have been deferred. These exams typically are held in March-April and it is our expectation that they might only be held in July or August in this year.

“If this happens, then there will be Indian students who will not be able to commence even in UK or Canada even if these countries are open to visas and travel. This is a real possibility,” he added.

4 Responses to Australia: stranded students having “thoughts of self-harm”