Perth has revealed an ambitious target of doubling its number of international students through improving employability with a new three-pronged StudyPerth released its strategy.

The Where bright futures begin 2018-2025 strategy, released in late October, sets out a strategic framework for the state’s education sector across the themes of live, learn and launch and looks to attract more than 100,000 international students to Western Australia’s capital city.

“Western Australia is issuing an invitation to students wanting to expand their horizons – and their opportunities – to explore Perth and all it has to offer,” said WA premier Mark McGowan.

“The opportunity for Perth in international education is enormous – the time to grasp it is now.”

Among the goals, Phil Payne, chief executive of StudyPerth which will oversee the implementation of the strategy, said the launch themes around employability were among the most vital after research conducted by QS Enrolments of almost 6,000 students and agents found those messages resonated most.

“It was absolutely clear that they were making instrumental choices, and it was about 90% or so that were making decisions about courses and destinations that would advance their career,” he said. 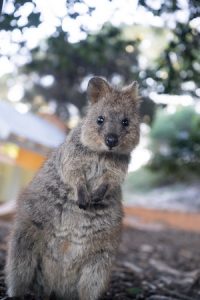 StudyPerth say there’s much more to WA than this cute Quokka. Photo: Unsplash

Speaking with The PIE News, Payne added that tourism factors were found to have the least impact on international students when deciding where to study.

“It’s not about quokkas and beaches and the small bar scene,” he said.

As part of promoting and improving employability outcomes, the strategy seeks to increase collaboration with industry, provide more students with work-ready skills training and increase the number of graduates accessing work.

The move is somewhat of a reversal of its decisions to slash the number of occupations on its approved list and remove Perth from the regional areas list, which made it harder for foreign nationals to meet the criteria for state nomination for permanent residency.

The changes, which were implemented shortly after the 2017 state election, are widely believed to have been the most significant contributing factor in WA being the only state to lose international enrolments during Australia’s boom period.

“If we’re not addressing those concerns, those aspirations, we’re missing the point”

Payne added there was a need to increase the brand recognition of Perth as a study destination, and said several initiatives were underway to meet what he called the strategy’s ‘hygiene’ factors, such as student satisfaction across areas such as study, living, arrival and support

“Creating Perth as a first choice destination is an absolute priority,” he said.

“That needs to be our priority because no matter what we do once students get here, we need to get more students here in the first place.”

Among them, a marketing campaign will be piloted in targeted Tier 2 cities in China in the lead up to the Chinese New Year, before being rolled out to other strategic locations using a nuanced approach that meets the marketing needs of that country.

“The pilot is about creating the brand narrative, the brand message, and it’s going to be about beyond education, your experience in Perth is more than about your studies, it’s social, it’s culture,” he added.

Perth hosted around 54,000 international students in 2017, and the launch sees WA become the latest and final Australian state to implement an international education strategy.

One Response to Employability at heart of new Western Australia strategy