QS Quacquarelli Symonds has named the world’s top 500 universities for nurturing graduate employability, with the US institutions taking the top three spots. In contrast to the QS World University Rankings, however, Asia’s top universities were shown to outperform continental Europe’s leading institutions.

Institutions from 73 countries were included in the top 500

Overall, institutions from 73 countries were included in the top 500.

Massachusetts Institute of Technology retained the dual honour of being both world number-one in QS’s world rankings and the number-one for employability, followed by Stanford University in second and the University of California at Los Angeles in third.

The University of Sydney took the fourth spot, with Harvard University rounding off the top five.

In stark contrast to the university world rankings, however, Tsinghua University in Mainland China ranked sixth while continental Europe’s top university Switzerland’s ETH Zurich placed 11 spots below it at number 17.

Mainland China has five institutions among the world’s top 50 in total and is the third-best represented study destination after the US, which boasts 20 top-50 institutions, and the UK with seven.

According to QS, the indicators allow universities which may not typically be ranked among the world’s best to earn credit for how successfully they prepare students for the world of work.

“For instance, UCLA, the University of Sydney and the University of Melbourne are all in the top 10 of the Graduate Employability Rankings despite falling outside of the world’s top 25 universities in our world ranking,” QS said in a statement.

Australian institutions were shown to perform best in the Employer Reputation indicator, followed by the Alumni Outcome and the Employer Partnership indicators.

“The Australian higher education system places a great emphasis on students’ career outcomes and such focus is reflected in this ranking,” said Ben Sowter, research director at QS.

Sowter said that the results indicate that employability is a particular strength of Latin American universities.

“Though budgetary constraints and the dominance of English as the academic lingua franca mean that the continent’s institutions do not perform as well in our research-focused rankings, it is clear that universities in the region have not neglected an essential aspect of their mission: getting students good post-study work,” he said.

Sowter added that the research shows that, amid the many reasons that students are going to university, concerns about their future career is primary amongst them.

“The rankings are designed as a service to those students, and our method is designed to offer them the most extensive look available at what their chosen university might do to help their career.

“[Overall] it is interesting to note that when looked through the employability lenses, the picture of the universities’ competitiveness is considerably more diverse than in the overall global rankings,” he added. 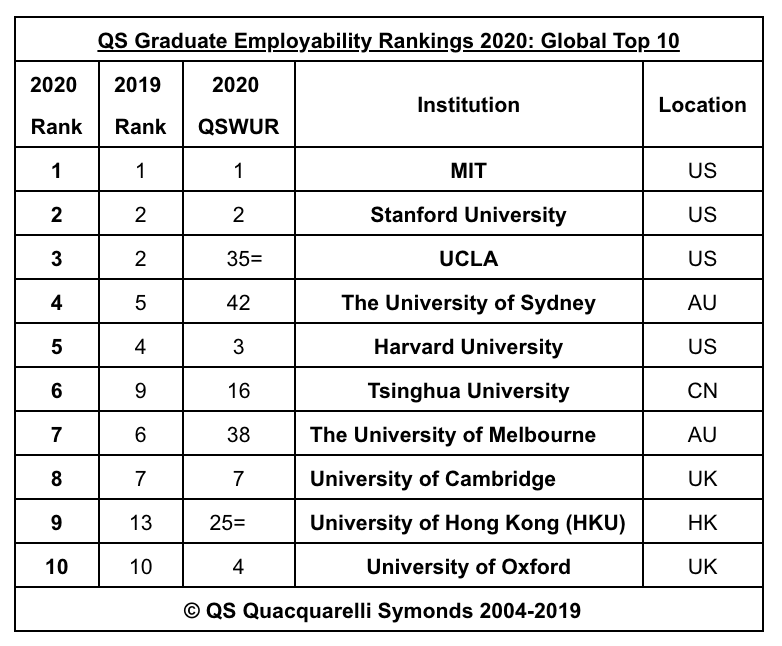