Posted on Jan 7, 2020 by Kerrie Kennedy
Posted in News, Work rights, under Europe.
Tagged with alumni, Cturtle.
Bookmark the permalink.

Few respondents cited alumni as their primary source of information

Between June and September 2019, 16,830 responses to online surveys were collected – of which 4,673 participants were educated in the UK, and an additional 479 were educated in other European countries.

Of the combined participants educated in the UK and Europe, the majority (36%) were from Malaysia, 21% were from India, 11% from Vietnam, and 10% from Singapore.

A total of 95% of the survey participants had already completed their studies.

According to the survey report, an almost equal number who studied in the UK (83%) and Europe (82%) said they chose to study abroad to improve their career opportunities.

By comparison, ‘alumni engagement’ was a factor for just 10% of UK and 12% of Europe educated respondents.

Despite some similarities in figures, there were some clear differences when it came to the primary source of study abroad information for both cohorts.

According to the report, education counsellors and agents were the primary sources of information for 35% of UK educated participants, compared to 44% of those who studied in Europe.

Meanwhile, websites or contacts at the school were important sources for 29% of those educated in the UK compared to just 12% of those who noted Europe as their country of study.

“I believe there needs to be better access to reliable information for future international students whether that is from universities, agents or third parties like Cturtle and UniAdvisor,” Cturtle founder and CEO, Shane Dillon, told The PIE News.

“In general, universities need to modernise their approach, leverage technology and alumni to better engage future students and improve the reliability of that information.”

And despite alumni being noted among the most reliable sources of accurate information with regards to ‘life in the UK and Europe’ (74% and 79% respectively), as well as ‘migration opportunities’, ‘job opportunities’ and ‘work rights’, just 6% of UK educated and 7% of Europe educated respondents cited alumni as their primary source of information. 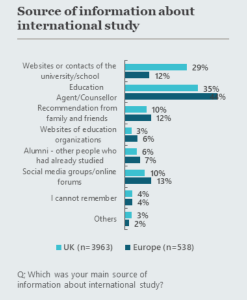 “From our experience universities have preferred the ‘poster child’ approach with alumni, heavily focusing on the promotion of the rare graduate who immigrates to the UK and is successful in their chosen field,” Dillon said.

“This can be misleading to the experience of the majority of international students with 97% end up working outside the UK.

“I believe better access to reliable information for future international students from the most trusted and reliable source “international alumni” solves this pre-departure knowledge gap,” he added.

Some 65% of UK educated and 74% of Europe educated respondents also noted that they were “satisfied with the return on investment”.

A total of 74% in the UK and 78% in Europe said they had a “sense of being welcomed in the country of education”, with 87% and 92% of respondents respectively noting that they felt “safe on campus”.

With regards to employment, around half of students (45% in the UK and 52% in Europe) said that they worked part-time while studying.

However, just 28% in the UK and 31% in Europe said their university supported them in finding a part-time job.

By comparison with the more extensive Cturtle survey, 50% of participants educated in the US, 45% in Canada and 44% in New Zealand said their universities supported them.

However, participants educated in Europe had the highest proportion (61%) of part-time jobs related to their areas of study, across the entire survey.

“I think it is important to support international students who want part-time work, this is critical to their financial security while students and their overall experience in the country of education,” Dillon told The PIE.

“The European part-time work related to the field of study was also a welcome surprise for us,” he added.

Post-graduation, 87% of UK educated respondents said they are currently working in their home countries, compared to just 3% in the UK.

“We believe it will be universities who can prove – with data – the employment outcomes of their international graduates who will win the competition for future student enrolments,” concluded Dillon.

One Response to Alumni are “most reliable” source of info for students looking to UK, Europe